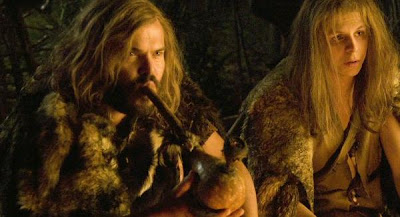 Early in Year One one character lamely tries to get one over on another and the other responds, "This is just insulting." There's no better way to describe the film as a whole. It's insulting. It's the cinematic equivalent of a school project that you forget is due until about 20 minutes before class so you slap a bunch of stuff together quickly and declare, "Good enough."

Year One begins with a couple of cavemen, Zed (Jack Black) and Oh (Michael Cera), who are less than popular amongst the members of their small village - Zed because he's an inept hunter and Oh because he's a gatherer which is considered women's work. Afrer Zed eats an apple from the Tree of Knowledge (which I guess means that the cavemen are living in the Garden of Eden?) and accidentally sets fire to the village, he and Oh go on the run and work their way through a few biblical stories, starting with that of Cain (David Cross) and Abel (Paul Rudd) and ending up in Sodom and Gomorrah (well, Sodom, having decided that they'll go to whichever one has the best whores, and the screenwriters having decided to send them to the one which will be easiest for lazy gay jokes).

At various points throughout their journey they encounter two women from their village - Maya (June Diane Raphael) and Eema (Juno Temple) - who are sold into slavery and end up in Sodom. The film finally starts to formulate some loose sense of plot once everyone is in Sodom and Zed pretends to be "the Chosen One" in an effort to keep Maya and Eema from becoming virgin sacrifices. This all ends with a big fight scene in which Zed and Oh are able to prove that they're "real" men and then a speech by Zed about... self-determination or something, I don't even know.

The jokes in Year One come in three forms: scatalogical; dick jokes; and kind of thing where something that isn't particularly funny once is repeated multiple times in succession in an effort to beat the audience into submission and earn a half-hearted chuckle. Year One never seems particularly invested in being clever or funny and, frankly, sometimes it seems bored with itself. There's a running gag at the beginning (dropped pretty quickly) which involves Oh being attacked by something (a snake, a cougar) and on the verge of being killed and then... the film cuts to a scene sometime later and Oh is fine and there's absolutely no explanation as to how he survived the attack. Nothing really matters from one scene to another because the film is so half-baked.

Year One might still be salvagable on the strength of its performances - and by salvagable I don't mean "good" I just mean bad in a guilty pleasure sense - except that the actors don't really seem to care any more than the writers or director. Black and Cera both tend to continuously play variations on one character and though each is capable of turning in a good, if perhaps derivative, performance as those respective characters, here they play them at their most basic level without bothering to build anything resembling a performance on top of it. The end result is that Year One is an extremely low energy and downright joyless film that should probably be avoided at all costs. I caught this on TV but still want my money back.
Posted by Norma Desmond at 8:00 AM

Oh boy. I watched it on TV and it was horrible. It was excruciatingly boring and no one really acted in that movie. Everyone seems to play the same character they've been playing and it just doesn't work at all.

I don't mind Michael Cera but he was beyond annoying in the film with his whiny little girl voice. Him upside down and peeing on himself should've made me laugh but instead, I was like "uh...".

This is why I'm worried about the third Ghostbusters movie, if it ever gets made, because of the idiots who wrote this movie.

This was bad....reeeaaaaaalllllyyyyyyyyy bad! Insulting is the only word for it and believe me it was agony to sit through in a cinema!! I've never walked out ona movie but this pushed that record!!