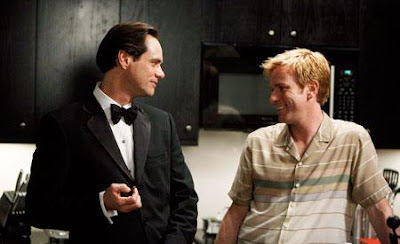 It's beyond cliche at this point to say that a story is so bizarre it must be true, but how else could you possibly describe the story of Steven Jay Russell, a man who escaped from prison multiple times, including once by faking his death from AIDS (and, bear in mind, he was able to trick the doctors, too)? Writer/directors Glenn Ficarra and John Requa tackle this unbelievably true story by treating it like farce, a strategy that works very well, since playing it straight probably would have led to a feeling of cognitive dissonance.

Jim Carrey stars as Steven, who relates much of the story from his "deathbed." His life as a con man with a maleable identity is set up early in the film, when he relates an incident in his childhood when he discovered that he was adopted - for him this opens up a world of possibility. As an adult he becomes a police officer specifically so that he can access records to find his birth parents and then, when that fails to yield positive results, he shifts gears, announcing to his wife (Leslie Mann) that he's gay and moving to Florida. It's while he's in Florida living with his boyfriend, Jimmy (Rodrigo Santoro), that he realizes just how expensive his tastes are and starts bringing in cash with insurance scams.

His schemes eventually land him in prison, where he meets Phillip Morris (Ewan McGregor), with whom he falls instantly in love. After gaining his own release, Steven pulls a fast one to get Phillip released early and shortly thereafter secures a position as CFO for a large company, which he begins robbing blindly so that he and Phillip can live lavishly. His schemes once again come crashing down, resulting not only in his going back to jail, but also losing Phillip. Steven makes a couple of escapes, one of which ends with Phillip being sent back to prison as an accomplice, and then pulls off his most impressive con: "dying" of AIDS.

I Love You Phillip Morris is a mostly light hearted affair, viewing Steven in a way that I imagine is not unlike the way that Steven would view himself. It doesn't judge him for his actions or view them as particularly wrong; rather, it seems to take a position of admiration for Steven's tenacity. Steven, as he's portrayed in the film, is a sociopath and the film essentially unfolds from a sociopathic perspective. Morality doesn't play a role; it's all about what Steven can get away with and how, despite his intelligence, he continues to get caught.

As an actor Carrey tends to get a lot of flak both for making films that appeal to the lowest common denominator and for his ventures into more challenging territory. I Love You Phillip Morris plays to his strengths in that it's broad enough to allow him to perform the elastic physical comedy that he first became famous for, but still provides him with a character that requires a degree of nuance. Here Carrey not only has to perform as the character but to perform as a character who is, himself, almost constantly performing. There are a number of levels for Carrey to play with Steven and he excels with all of them. The film itself might be just a touch too quirky for some, but I would consider it a success.
Posted by Norma Desmond at 8:00 AM