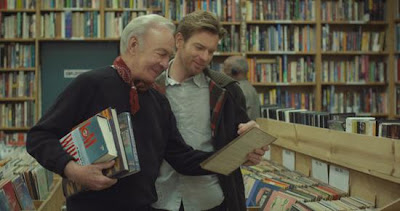 In Beginners a father and son discover that it's never too late to make a fresh start. Both have spent a long time denying themselves the opportunity for real happiness - the father because of societal pressure; the son because he fears that real happiness does not last - and find that while it's not so easy to make big changes, taking a chance isn't without its rewards.

Beginners takes place over three time periods. The present day follows Oliver (Ewan McGregor), still recovering from his father's recent death and having taken custody of his father's Jack Russell. Wanting to lift his spirits, his friends drag him to a Halloween party, where he meets Anna (Melanie Laurent), an actress. They begin a tentative romance, but Oliver is haunted by his fears about relationships and begins sabotaging it before he can get any more invested in her or the relationship.

The other two timelines are set in the past, one following Oliver as a child, witness to the crushing loneliness of his mother (Mary Page Keller), who is defeated by the reality of her marriage. The other takes place in the recent past, when Oliver's recently widowed father, Hal (Christopher Plummer) reveals that he's gay and, later, is diagnosed with cancer. Hal immerses himself in the gay community and develops a wide circle of friends and also begins a relationship with a much younger man, Andy (Goran Visnjic). Oliver takes all this in stride and does the best he can for his father, whose decline after his cancer diagnosis is fairly rapid.

McGregor plays Oliver in a very muted and understated way, which is appropriate given how closed off Oliver is as a character. His scenes with Laurent's Anna are sweet but also tinged with sadness as if, even at the beginning, he's already anticipating and preparing himself for the end. It's telling that his memories from his childhood centre entirely on his mother and her obvious disappointment in the way things have turned out. He's afraid of being trapped like that, of finding someone to settle down with but still, in very essential ways, ending up alone. I think that the film does an excellent job at contextualizing his relationship issues without necessarily excuing them. By the end of the film he's forced to take ownership of his self-destructive behaviour and, though it ends on an optimistic note, the film makes it clear that alone won't solve his problems.

Although Plummer has the character with the more tragic arc, what with the whole living a lie for a few decades and then succumbing to cancer thing, his is the more joyful character and the one from whom the film derives a lot of its forward momentum. Despite all he goes through, Hal is a joyful character, even at the end of his life. Plummer's performance is great and I wouldn't be surprised to see him recognized in some of the year-end awards, nor would I be surprised to see the film pick up awards in a few other categories. Beginners is a resonant and quite moving film, a finely crafted character study that brims with honesty.
Posted by Norma Desmond at 8:00 AM