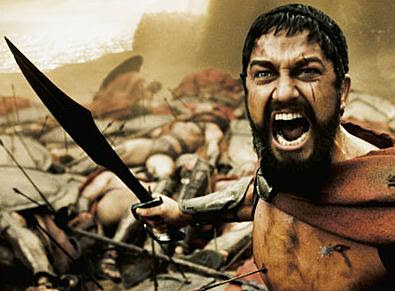 300, adapted from the graphic novel by Frank Miller, takes as its subject the Battle of Thermopylae, in which 300 Spartans led by Leonidas (Gerard Butler) made a stand against the massive Persian army of Xerxes (Rodrigo Santoro). After quickly and efficiently establishing the story's primary conflict - Leonidas is denied the opportunity to take the entire army because the Euphors, having been paid off by the Persians and a corrupt Spartan politician, refuse to give their blessing for going to war - director Zack Snyder moves on to a series of action set pieces involving blood, abs, and scenery chewing (not always in that order).

When 300 was released, there was a lot of talk about whether or not it was meant to be a commentary on the contemporary situation in Afghanistan and Iraq. While I can see how someone might use the elements of the film to make such an argument (though given that the Persians are depicted as culturally decadent and having the advantage of vast resources, not to mention being the invading group, while the Spartans are culturally conservative and wage a virtual guerrilla war from within their homeland, it seems like an inversion of the contemporary conflict, wherein West represents East and East represents West), I don't think that ultimately holds up. To be honest, I don't think Zack Snyder has ever sat down to think about something long enough to actually mean anything by what he puts in his films; I think he just composes images that he thinks will look cool and then calls it a day.

And 300 did look really cool when it played on the big screen. Four years later, however, it's already showing signs that it's going to age badly. For one thing, there's the whole fast motion-slow motion-fast motion thing that Snyder loves that just seems so played out now. For another, the color scheme, which is muted and drained, makes it look unattractively washed out. There are certain shots which make it seem like the film really longs to be in black and white rather than this pretense of color.

All that being said, 300 is a fairly entertaining film if you're in the right mood. It's terribly silly and definitely a style over substance affair, but it's not without its moments.
Posted by Norma Desmond at 8:00 AM

Funny thing with 300 is that it is very accurate historically!! ( Thermopylae in Greek means Hot Gates by the way!! ).sure it is super stylised but I was surprised by the fact Synder didn't mess with the historical background as much as I thought he would.
I liked it more than I may have otherwise for this fact as I'm a history freak so this was like a fictionalised account of the battle.
It has its appeal but I can see why many aren't fussed on it.

I agree that it doesn't mess too much with the facts as history knows them, but Snyder and Miller are definitely selective with respect to cultural accuracy.

Great review! I think you make a good point about the analysis of this film - it could potentially serve as an interesting analogy for modern warfare in the Middle East, but I in no way believe that was Snyder's intention.

I actually hated 300 the first time I saw it, but on repeat viewings I grudgingly came to appreciate Snyder's style. He really is an artist, and some of the images in the film are undeniably impressive. The story is weak but the dialogue isn't actually that bad (and of course there are plenty of epic lines), and the acting is actually pretty solid.