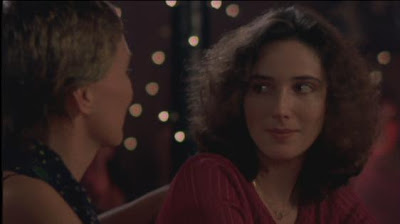 There aren't a ton of films that you can honestly say are really ahead of their time. Films, by and large, actually tend to be just a little bit behind trends (because, of course, you can't capitalize on something until it's happened) and tend to be less the harbingers of change than confirmation that changes in society have already occured. John Sayles' Lianna is a film that really was ahead of its time, so far ahead that in certain respects there are movies made today that don't match its intelligence and sensitivity regarding its subject matter.

Put simply, Lianna is about a wife and mother (the eponymous Lianna, played by Linda Griffiths) who falls in love with a woman, leaves her failing marriage, and struggles to come to terms with her sexuality and the changes in her life. As the film opens, we're given the sense that Lianna's marriage to her film professor husband, Dick (Jon DeVries), has been unhappy for a while. Aside from the fact that he views himself as her intellectual superior even while relying on her to do much of the legwork for his research, he's also unfaithful. In an attempt to alleviate her growing feelings of boredom and develop an independent sense of self, Lianna begins taking a child pscyhology course with her friend, Sandy (Jo Henderson).

Soon Lianna embarks on an affair with her child psychology professor, Ruth (Jane Hallaren), a situation which is complicated not only by Lianna's marriage but also by the fact that Ruth has "a woman back home" (though Lianna doesn't find this out until well into the relationship). There's also the fact that the relationship isn't all that different from Lianna's relationship with Dick, who was also her professor prior to their beginning to date. When Ruth leaves to take care of the loose ends of her other relationship, Lianna is left to reckon with the fact that the future may hold more loneliness than happiness.

Lianna works in large part because Sayles allows the characters, especially Lianna, a great deal of complexity. Her decision to come out frees her, allowing her to be more authentically herself, but it also leaves her somewhat outcast, living at the fringes. She moves into a tiny apartment, loses her children (for a while, at least), loses her friendship with Sandy, and is stuck with the knowledge that her relationship with Ruth may only be temporary. Sayles brings an incredible sense of claustrophobia to the film, making Lianna's loneliness and isolation palpable and very poignant. Lianna is an incredibly bittersweet film, one in which the protagonist can only gain something by losing something else, and one which feels brutally, painfully honest.

Another reason that the film works is the rather brave performance at its centre. Griffiths, a Canadian actor and playwright, completely rises to the occasion of the material and is unafraid to leave Lianna vulnerable and defenseless. The supporting cast is also great, including the young actors who play Lianna's children, whose very different reactions to the changes taking place are treated with complexity and sensitivity by Sayles; but it's Griffiths who gives the film its haunting quality. Lianna isn't a perfect movie and there are certainly a few elements that make it seem a tad dated, but by and large it's a great character study and a beautifully constructed drama.
Posted by Norma Desmond at 8:00 AM

Nice review. I'm a huge Sayles fan, but this was a disappointment for me. The actors do a nice job, but it just didn't grab me like most of his movies. Still, it's a well-crafted story with realistic characters.