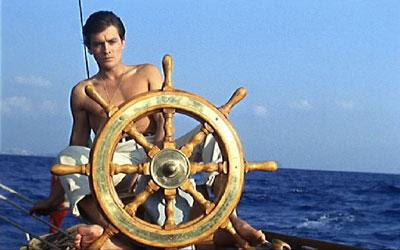 It's funny, given that European films are often regarded as going where Hollywood films never would, that the French adaptation of Patricia Highsmith's The Talented Mr. Ripley is the one that, in Highsmith's own words, ends with "a terrible concession to so-called public morality that the criminal had to be caught." Despite that, however, Rene Clement's Purple Noon is still a wonderfully suspenseful and moody film about the totally amoral con man whose stories have inspired a number of well-received films.

Purple Noon begins in medias res, with Tom Ripley (Alain Delon) having already come to Italy and ensconced himself with Philippe Greenleaf (Maurice Ronet), who has agreed to help him scam a bit of money out of Greenleaf's father. Philippe's enthusiam for the project, however, quickly wanes and it becomes increasingly apparent to Tom that Philippe has tired of his company. When he sets off on a sailing trip with Philippe and his fiancée, Marge (Marie Laforet), she tells him directly that it's time he left and though he's able to drive a wedge between Philippe and Marge that causes her to leave, he murders Philippe shortly thereafter.

Tom dumps Philippe's body in the water, weighing it down with the anchor from Philippe's sailboat, and then sets out to take over his life. His happiness is short lived, however, as shortly after setting himself up in Rome, Philippe's friend, Freddie (Billy Kearns), arrives and realizes that Tom has been passing himself off as Philippe, leading Tom to kill him, too. With the police (not to mention Marge and Dickie's family) closing in, Tom has to think fast in order to escape being discovered and forced to face the consequences of his actions.

Adapted by Clement and Paul Gegauff, Purple Noon departs from Highsmith's novel in some fairly significant ways, the biggest of which is that it all but abandons the psychosexual element that defines Ripley the novel and Tom as a character. Highsmith's Tom is a thinly veiled (albeit somewhat self-loathing) homosexual who can't stand women, particularly Marge. The underlying tension between Tom and Dickie (as the Philippe character is called in the novel), which is both sexual and aspirational, is a major theme in the novel, but doesn't truly factor into the story here. Here Tom's desire is not necessarily to have Philippe or to become him, it is simply to get at his money and as part of his scheme to do so he forges a will that leaves all of Philippe's money to Marge and then he seduces her. The changes work well, incidentally, but makes Purple Noon a very different animal from the book on which it is based.

Also making it different, of course, is that ending which Highsmith so disliked. In the book Ripley gets away with it (and continues to do so for a whole series of novels), but Clement ends Purple Noon with the suggestion that Tom is just seconds away from being caught. Although I think the ending of the novel is great, I disagree with Highsmith that Clement's ending is somehow unsatisfactory - it's great, too, just in a totally different way. The way Clement shows Tom caught up in his lies is masterfully done especially since the discovery scene is juxtaposed against scenes of Tom happily lounging in a chair, convinced that he's about to set foot on easy street.

Dalon's charismatic performance as Ripley made him a star in France and it's easy to see why. Ripley is fascinatingly, glamourously evil and, though Delon lacks the nervous energy and self-doubt that Matt Damon would bring to the character of Ripley in 1999's more faithful adaptation, The Talented Mr. Ripley, he perfectly captures the idea that Ripley has of himself, the image that he spends the novel wanting so desperately to project. Purple Noon is considered a minor classic in some circles but make no mistake: there's absolutely nothing minor about it.
Posted by Norma Desmond at 8:00 AM