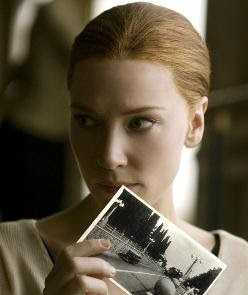 Sure, it's hard to feel too bad for Cate Blanchett. She does already have an Oscar (for The Aviator), plus 4 other nominations (for Elizabeth, Notes on a Scandal, Elizabeth: The Golden Age, and I'm Not There). Plus, 2008 had a pretty strong slate of Best Actress contenders (though, as I mentioned when I wrote about Sally Hawkins' performance from that same year, I don't think it would have been a tragedy if Angelina Jolie had been passed over for The Changeling). But Cate Blanchett is so very, very good in The Curious Case of Benjamin Button, it's a shame she went unrecognized.

The Curious Case of Benjamin Button is the story of a man born with an unusual condition which causes him to age backwards. The story on which it is based is a comedy that is fairly silly, but the film adaptation is a love story that reaches for the profound. Because of this, the role of Daisy, the love interest, is absolutely crucial. She provides the counterpoint to Benjamin, the realistic progression and the point of identification for the audience that grounds the story so that it can resonate.

Blanchett plays Daisy from the age of 21 to the age of 81 and through various phases in her relationship with Benjamin. Blanchett moves seamlessly through various ages (and emotional maturity levels) and ways of engaging with Benjamin. At one point she is infatuated with the idea of him as an older man (though he's really only 6 years older than her) and tries to seduce him. At another she angrily rejects him, resentful of the way that he's attempting to insinuate himself in her life. They finally hit a groove where they're ages more clearly match up but, of course, time hasn't stopped which means that this golden period will be brief. He recognizes this and prepares himself for the inevitable while she tries to hang on, trying to convince him that they can make it work. As the film continues to progess, and Benjamin gets young enough that he can no longer be played by Brad Pitt, the film relies on Blanchett more and more as its emotional anchor. The final scenes between Benjamin and Daisy, where she's an old woman and he's a seemingly young boy with Alzheimer's, wouldn't work with a lesser actress. The quiet strength she brings to these scenes make them work.

When the Oscars rolled around, The Curious Case of Benjamin Button received 13 nominations, including one for Pitt and for Taraji P. Henson for Best Supporting Actress, but nothing for Blanchett. Even in the awards leading up to the Oscars, the only nominations she received were from the Broadcast Film Critics Association and the Saturn Awards (plus as SAG nomination shared with the rest of the Button cast). It's a glaring omission because, though Pitt's performance is the film's soul, Blanchett's is the one that gives it heart. Her performance as Daisy is a thing of beauty and one that deserved a little recognition.
Posted by Norma Desmond at 8:00 AM

oooh ilike this performance too! but my favorite is notes on a scandal.

THANK YOU. I'd have nominated her. The standout in the film (edges out Taraji) she nails young Daisy in a way you didn't think she could. SO lovely.

Actually, Tilda Swinton made a greater impression on me in that movie. But that's what she usually does in her movies - outshines the leads.