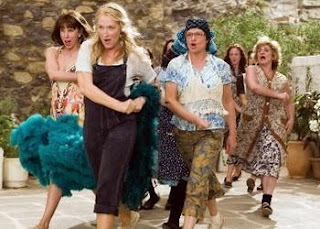 Objectively speaking, I know that Mama Mia! isn’t a good movie by any normal measure of what makes a movie good. However, I’d be lying if I said that it wasn’t the most fun I’ve had at the movies all year. If I saw it on DVD, I’m sure I’d be more keenly aware of all its flaws, but there’s something about seeing it in a theatre full of people who are really into it that I liken to the experience of seeing The Rocky Horror Picture Show, in that it isn’t really the movie itself, but the experience of seeing it with a whole bunch of other people, that makes it so special.

The action takes place on a small Greek island where Donna (Meryl Streep) has raised her daughter, Sophie (Amanda Seyfried) and runs an inn. Sophie, who has never known the identity of her father, discovers Donna’s diary and learns that there are three possible candidates: Sam (Pierce Brosnan), Bill (Stellan Skarsgard) and Harry (Colin Firth). Convinced that she’ll know her father at first sight, she invites all three to her impending wedding, which causes a variety of problems.

I’m sure you won’t be shocked if I tell you that the plot has very little bearing on the film beyond simply connecting the songs. In that regard, it does a serviceable job, though you really have to suspend your disbelief when it takes Donna the entire film to realize that it’s not just a coincidence that these three particular men have all shown up on the eve of Sophie’s wedding. And it’s also kind of unfair to build an entire plot around the question of paternity and then never actually resolve it. Personally, I suggest that if Sophie really wants to know she should just take all three men on Maury, because he does like four paternity shows a week (not that I have ever, during brief periods of unemployment, watched that show).

As far as the music goes, you’re either going to love it or hate it, but since most people already know whether they like Abba or find the music a particular form of torture, I doubt that many people have or will walk into this movie unaware. With that in mind, I have to say that I was a little put off by how aggressive the first half of this movie is - everyone is trying so hard to prove how much fun they’re having that it looks a lot more like work than fun. Meryl Streep is one of my favourite actresses, but it must be said that of the entire cast, she’s the most guilty of this “look how much fun this is” preening. I think it’s fair to say that anyone who walks into this movie is already pretty much sold on it, so the filmmakers and the cast could have pulled back a bit. By the second half everything feels more relaxed and the film hits its stride, but you have to get through that first half first.

I enjoyed Mama Mia! a lot, but I won’t argue with anyone that it’s a cheesy movie because it is. Oh, how it is. I mean, the "Voulez-Vous" number resembles a particularly overblown Duran Duran video from the 80s, but so what? It’s good cheese and it left me with a smile on my face.