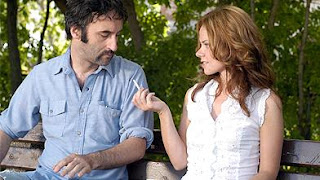 It’s generally a bad sign when you’re watching a movie and you look at the clock and think to yourself, “Huh... they’re going to run out of time before something can happen.” Monkey Warfare is a well-acted and occasionally clever film with just one problem – a movie about anti-Capitalist revolutionaries really shouldn’t be so boring.

The story centers on Dan (Don McKellar) and Linda (Tracy Wright), two former revolutionaries who are currently living off the grid, getting by collecting other people’s junk and selling it. After his weed dealer goes missing, Dan meets Susan (Nadia Litz), who hooks him up and with whom he hopes to hook up. Susan insinuates herself into Dan and Linda’s life, borrows some of Dan’s anti-establishment literature, gets him to steal a couple of bikes for her (she has a habit of wrecking them), and then springs a surprise on him: she wants Dan and Linda to join Spokes, a revolutionary group that rides bikes and destroys SUVs. For two people like Dan and Linda, who want nothing more than to lay low, this is the worst possible thing that could have come into their lives.

The style of the film is very postmodern – certain sections resemble an artsy music video more than a film – and the characters of Dan and Linda are very finely developed and wonderfully brought to life by the actors - the fact that I’m giving the film two stars instead of one is due to the performances by McKellar and Wright. Dan and Linda are living in a kind of suspended animation, hiding out due to an incident in their past and living day to day in their insulated little world (when Dan lets Susan into their place, it’s a really big deal). When asked if she and Dan are a couple, Linda states that they just live together, then corrects herself to say that they “exist” together, which does seem like a more accurate way to describe it. Dan and Linda just sort of plod through life and McKellar and Wright deliver performances of the solid, under the radar variety that are really effective and engaging.

Most of the film consists of people just hanging out, which would be fine were it not for the fact that there’s an undercurrent to the scenes which makes it seem as if it’s building up to something and then when the story finally gets there, it just kind of fizzles out. If the revelation about Susan had taken place earlier in the film, or if there had been more to the story afterwards, it would have been better because there would have been more time to explore revolutionary activities/ideals as they relate to the generation gap, which is something that is touched upon briefly right before the film ends.

Monkey Warfare should certainly be given points for originality – it’s definitely unlike any other movie I’ve ever seen – and it has moments of brilliance, but it ultimately failed to hold my attention. When a movie’s runtime is under an hour and a half, there shouldn’t be enough time for your mind to drift, but that’s exactly what happened to me. No doubt there are people who have seen or will see this and think it’s fantastic, but I’m not one of them.