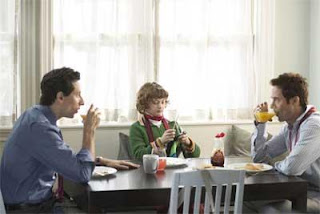 Breakfast With Scot is a film that can perhaps best be described as “cute” – at least in parts. It’s neither very good nor very bad, original only in the fact that its main characters are gay. The lead performance by Thomas Cavanagh is good, displaying more layers than this thin story deserves.

Eric McNally (Cavanagh) is a former Maple Leaf turned sports caster who has been in a relationship with Sam (Ben Shenkman) for four years but is still very much in the closet. When Sam’s brother Billy’s (Colin Cunningham) ex-girlfriend dies of a drug overdose, guardianship of her son, Scot (Noah Bernett), is left to Billy who is currently M.I.A. Until Billy is found and brought back to Toronto, Sam and Eric are charged with looking after the boy. Much to Eric’s horror, Scot is what can best be described as “swishy.” He has a feather boa, he loves musicals, he likes to wear his mother’s makeup, and he’s overtly affectionate, leading Sam to introduce him to a hierarchy of gestures from handshake to kissing, trying to explain to him why it’s perhaps best if he doesn’t kiss his male friends goodbye at school.

The story’s main concern is with Eric’s own internalized homophobia. He’s been in the closet his entire life and to be seen with this flamboyant kid makes him deeply uncomfortable. He has very traditional ideas about what is and what isn’t acceptable behaviour and in a roundabout way tries to convince Scot that he ought to start acting like a “boy.” Scot mentions to him that everyone thinks he’s gay and asks Eric how he kept people from thinking that about him. “I didn’t have to do anything; I played hockey,” Eric states, oblivious to the fact that while he was playing his nickname was “Erica” and everyone was aware of his preferences anyway. Scot begins playing hockey himself, which both bonds him to Eric and serves to push them further apart.

Breakfast with Scot is a really routine movie, though I suppose it should get points for centering on a gay couple – albeit one that rarely seems like an actual couple. There’s very little affection between the two, even when they’re alone together, save for a brief peck on the lips at the end. The plot in which they find themselves is unimaginative, limping from plot point to plot point before coming to its inevitable conclusion. You’ve probably seen this movie, under one title or another, at least once before.

For the most part I found the film inoffensively bland, but there is one thing that particularly bothered me: the character of Billy. I don’t know whether it was the choice of director Laurie Lynd or of Colin Cunningham, but Billy is overtly twitchy, fast talking, and unreliable – coded fairly openly as a drug addict. No one in the film comments on this, especially when Billy shows up to claim Scot. The main complaint from Sam and Eric is that Billy is more interested in the insurance money he’ll get as Scot’s guardian and the fact that he’s already engaged to another woman. Personally, I’d be a little more concerned that Billy would take Scot back to Brazil and sell him for coke.