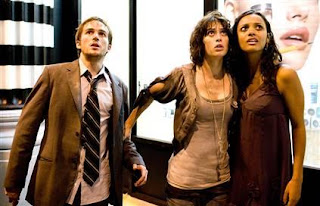 Cloverfield is an exceptionally effective film, perfectly crafted to achieve its goals. Filmed from the perspective of a handheld camera, the story unfolds with an urgency and intimacy that can’t fail to draw the viewer in as the characters attempt to flee a monster whose sudden appearance in Manhattan plunges the city into chaos.

The story is relatively straight-forward: Jason (Mike Vogel) and Lily (Jessica Lucas) are throwing a going away party for Rob (Michael Stahl-David), who is leaving in the morning to take a job in Japan. The evening is being documented by Hud (T.J. Miller), who spends most of the night trying to get closer to Marlena (Lizzy Caplan). During the party, Rob gets into a fight with Beth (Odette Yustman), with whom he’d slept a few weeks earlier. Beth storms out and shortly afterwards something strange happens and it quickly becomes apparent that the city is under siege. No one knows for sure what’s going on – though Hud is certain that he’s seen something - but everyone knows that they have to get out of the city. Despite the danger, Rob is determined to head into the thick of things and find Beth, who is trapped in her apartment.

For obvious reasons, this is a film that strikes a chord. It plays on the greatest of our fears, that of being caught unaware by something we don’t understand and launched into turmoil. It’s a monster movie but, obviously, it’s also a movie about terrorism that works to evoke the feelings and intensity of 9/11. By telling the story from the perspective of a handheld camera the film removes the distance that exists between the audience and the action, putting us right in the middle where we don’t always know what’s going on and we rarely get a clear glimpse of what we’re supposed to be afraid of. Intercut with the scenes of terror are scenes from weeks before, when Rob and Beth spent the day together at Coney Island. These moments add incredible poignancy to the story as a whole, highlighting the normalcy with which their lives had passed before and how quickly everything has fallen apart. The final words of the film are devastating given what we have just seen happen.

The greatest strength of the film is the way that it frames the action. It opens with a title card stating that the tape was recovered from the area formerly known as Central Park, which serves to set the film up as a document of the type that would likely be uncovered after an actual disaster in these times when everything is recorded for posterity (although how the tape survives at all is something of a mystery). The way that the story is constructed is great – although it does leave the characters somewhat in the lurch, robbing them of the opportunity to be fleshed out and became three-dimensional beings. We care about them to a certain degree but, ultimately, they’re just the faces of panic rather than individuals in their own right. When the film was over, I was hard pressed to think of any really distinctive personality traits which separated Rob from Jason or Beth from Lily. But despite the cardboard nature of the characters, the film itself is easy to engage with and the last third, especially, will leave you stunned.