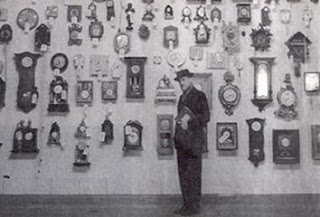 The Fifth Horseman Is Fear is one of the seminal films of the Czech New Wave, a work made under extreme scrutiny during the Communist regime which nonetheless succeeds in being critical of governmental repression of social freedoms. Ostensibly concerning life during Nazi occupation, the film is really reflecting life under the regime contemporaneous to the film’s making.

The story centers on Braun (Miroslav Machacek), a Jewish doctor who has been prohibited by the Nazis from practicing medicine. He now works for the Nazis, cataloguing property that has been confiscated from local Jewish residents – when we follow him home we see his own sparsely decorated apartment which seems to consist solely of a bed, a chair, a hook for his coat and his violin - and refusing to get involved in any resistance activities, insisting that he’s too old. One of his neighbours brings a wounded partisan fighter into the building and coerces Braun into operating on him. The man will need morphine, Braun declares, and goes into the city in to try to find some, a journey which will take him to a brothel, a madhouse and a place known as the Desperation Bar.

There’s a spy in the building who sees Braun with the patient and tips off the authorities. “I was only doing my duty,” he insists when confronted by the other tenants in the building, all of whom have been dragged out of their apartments while the Nazi officials conduct a full search of the premises. Braun is out when the officials arrive and they wait for him. There can only be one outcome to this situation, but Braun turns it into a moment of triumph, having discovered something fundamental about himself through his travels through the city.

Director Zbyneck Brynych shoots the film in a very intimate way, framing and composing the flow of shots to make it seem as if we, the audience, are there, observing Braun from a short distance, occasionally as if we’re spying on him ourselves. Sometimes the characters look directly at us, directing their comments to the camera. Often they engage in soliloquies in which Brynych makes us their confidantes. There’s a certain abruptness to the way that the film is edited – scenes end suddenly and the juxtaposition of scenes can occasionally be choppy, but both of these facets work with the overall mood of the film.

The Fifth Horseman Is Fear is really effective at demonstrating the small, every day ways that a totalitarian regime can suffocate those living under it. Braun’s visits to the brothel, madhouse and bar each demonstrate various degrees of suffering of the local people – the people in the madhouse are, obviously, insane; the patrons of the bar are on their way there (in fact, one of the patrons of the bar is dragged away and taken to the sanatorium); the sex workers are the most despondent of all, wearily carrying on their work as Nazi officers bang down their doors, unwilling to wait their turn. Hopelessness permeates the places that Braun visits, as if it has been socialized into the people; but Braun comes to realize something that saves his spirit: “You can’t change the way people think.” The Nazis can stop him from practicing medicine, they can invade his privacy, but they can’t change him - only he can do that. The film is tragic, to be sure, but in his own quiet way, Braun comes out the winner.