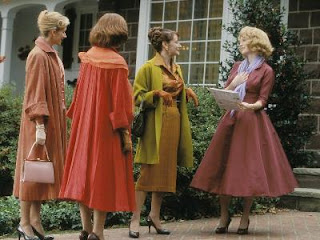 Todd Haynes is a filmmaker I’ve been aware of for a while now but until recently I’d never actually seen any of his films. I’d been meaning to see Far From Heaven for years but for some reason or another never got around to it. Recently seeing I’m Not There inspired me to seek out Haynes’ previous effort and I’m so glad I did, otherwise I’d have really missed out.

Inspired by the Hollywood melodramas of the 1950s, the film stars Julianne Moore as Cathy Whitaker, a housewife whose life seems picture perfect from the outside. She and her husband, Frank (Dennis Quaid), appear to be the model couple but even before Cathy discovers that Frank is leading a secret life, she knows that there’s something a little off about their relationship. When she and her girlfriends sit around the kitchen table discussing the frequency of their sex lives, she knows that her marriage is very different from those of other women, women whose husbands aren’t always working late and always too tired. She has no idea what, exactly, is wrong in her marriage until she sees Frank with another man and he confesses to having “a problem.” While he’s seeking therapy, Cathy develops a friendship with Raymond Deagan (Dennis Haysbert), which quickly becomes the talk of the town due to the fact of Raymond being black.

The way that the film deals with issues of race is very compelling, especially when combined with its treatment of homosexuality. Both Cathy and Frank are horrified by Frank’s secret life, but his homosexuality is seen as something that he can “recover” from and is further seen as something which can be kept a secret – if people saw Frank and another man together on the street, they wouldn’t jump to the conclusion that the two were lovers. Cathy’s relationship with Raymond, however, is something that people can see and Cathy being seen with Raymond is something that people talk about, something which has consequences for Cathy and her family in a social sense. The story may take place in the “progressive North,” but that doesn’t mean that racism isn’t any less socialized into people than it is in any other place.

The film gets a lot of things really right. The color pallet of the costumes, especially, is very evocative of films made in Hollywood in the 1950s with their rich, bright colors. Anyone familiar with 50s melodrama, particularly the films of Douglas Sirk, will recognize many of the themes and tropes of the genre in this film, as well as the more subtle language of coding. For example, while Frank is openly acknowledged by the film as being gay, there’s another character who appears briefly in one scene who is openly coded as being gay through his dress, mannerisms and speech patterns (you’ll know him the second you see him).

In its dealings with issues of race, Far From Heaven made me think of another relatively recent film: Pleasantville. While Pleasantville is heavy with irony, emphasizing the ways that the protagonists and the film itself are aware of and acknowledging the ways that values have changed since the 1950s, Far From Heaven approaches the subject in a way that is entirely sincere, reflecting the values and mores of the 1950s as if it was actually made in 1957, and not just set in 1957. This makes for really effective storytelling because it keeps the film from being preachy or winky and forces one to reflect on the ways that subtle and more overt forms of racism are still socialized into us today.

This is an incredibly thoughtful and well-made movie. The performance rendered by Julianne Moore, playing a woman who seems destined by her time and place to always be somehow unfulfilled, is excellent, perhaps one of the most unsung performances of the last decade. I’m only sorry it took me so long to finally see it.

Fine review, Norma ... I saw this flick just after it came out, and thought it was really strong. Dennis Quaid, especially, and of course Julianne Moore.