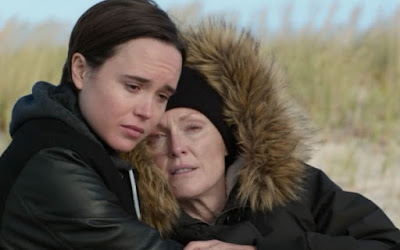 Freeheld, based on the Academy Award winning documentary short film of the same name, is the sort of film that is perhaps most generously described as "well meaning." It takes on an important subject that, despite its events taking place 10 years ago, was still more than relevant at the time of its theatrical release last fall, thanks to the US Supreme Court's ruling on same-sex marriage, and aims to be a rousing and powerful depiction of our continuing march towards equality. At times it is a rousing and powerful film. More often, though, it's a film that doesn't even actually seem all that interested in the two women who were the subject of that original documentary which makes the feature possible, and instead reduces them to being catalysts for the male characters around them to take action and bring about change and/or wrestle with their own personal feelings as they try to decide whether or not they want to be on the right side of history. Julianne Moore and Ellen Page are really good as the two women in question, but the film really gives them short shrift.

Moore stars as Laurel Hester, a detective in Ocean County, New Jersey, who works very hard to keep her work life and her personal life separate so that her career ambitions aren't stalled as a result of homophobia within the department. When she meets Stacie Andree (Page), she's reluctant to get involved both because of the age difference between them and because being in a relationship will make it significantly more difficult for her to keep her sexuality a secret from her partner, Dane (Michael Shannon), and the rest of the department. However, despite her reservations, Laurel really likes Stacie and after dating for a year the two buy a house together and legally become domestic partners, and though Laurel remains closeted to everyone else at work, she does confide the truth about her relationship with Stacie to Dane. It's only when Laurel is diagnosed with Stage 4 lung cancer and begins to worry about Stacie's ability to afford their house on her own that she comes out to the rest of the department as she begins fighting for Stacie's entitlement to her pension benefits.

The decision regarding whether or not Stacie will get the pension is in the hands of the county's Freeholders, five men who more or less immediately deny the request when made because they see it as a political hot potato they don't want to be stuck with and, in one case, because he has a moral objection to offering any kind of approval to a same-sex relationship. One of the Freeholders, Bryan Kelder (Josh Charles), struggles with the decision to deny the request but, when pressed by the other four members, agrees to vote with them so that the decision will be unanimous. While Laurel undergoes treatment and comes to terms with the fact of being terminal, she fights to convince the Freeholders to reverse their decision with the help of Stacie and Dane and, once the story hits the press, with the support of the Garden State Equality organization led by Steven Goldstein (Steve Carell). However, while Laurel really just wants to ensure that Stacie is taken care of, Steven sees her case as an opportunity to advance the cause of same-sex marriage, something that both Laurel and Stacie are ambivalent about. With the Freeholder meetings descending further into what Steven calls "political theater" and time running out for Laurel, the pressure is on both sides to see the matter resolved.

When Freeheld actually focuses on Laurel and Stacie, their relationship, and how their relationship is challenged by Laurel's illness, it's actually a pretty good movie. Moore and Page both bring a lot of warmth and humanity to their roles and the depiction of the relationship between the two women, who are very different from one another, strives for some complexity, particularly with respect to how they present themselves to the world. For Stacie, it's a given that being together means that people will know that they're together, but Laurel has a much more difficult time in being open about that and at various times throughout the film passes Stacie off as being her sister, friend, or roommate, her argument being that she doesn't want her sexuality to become an issue at work, which is ironic because her behavior is ensuring that her sexuality becomes an issue between her and Stacie. That the film does a fair amount of building up of the idea that Laurel has compartmentalized her life to such an extent that one part of it never comes into contact with another makes it all the more baffling that it doesn't really make much of how courageous it finally is when Laurel decides to come out specifically so that she can try to ensure that Stacie is taken care of after she's gone. The moment when Laurel is diagnosed and decides to put up a fight for the pension should be the moment when the film moves into its most powerful and socially relevant phase, but instead it's the moment when the film starts to lose the thread.

Once Laurel is diagnosed with cancer, she and Stacie are quietly shuffled off to the sidelines of the narrative, showing up every few scenes to demonstrate how quickly Laurel is losing her battle with the illness and how Stacie remains devoted to her care and continues to cling to the idea that she might somehow recover, and the film becomes the story of Dane, Steven, and Bryan. Dane throws himself into supporting Laurel and works to get other members of the police force to start showing up to the Freeholder meetings in order to support her, eventually shaming them enough that they finally do so; Steven takes hold of Laurel's fight and turns it into a large scale protest in support of same-sex marriage, bringing attention to Laurel's plight but also taking over the cause for his own purposes; and Bryan is torn between his belief that extending the pension to Stacie is the right thing to do and his desire to not rock the boat and be the one guy standing against the other four. By the second half, Dane, Steven, and Bryan are the active characters who are making things happen and experiencing revelations about themselves and what they're capable of standing up against, while Laurel and Stacie are passive characters floated in every once in a while to remind the audience what's at stake. It's a choice which really undercuts the whole enterprise. While Freehold isn't a bad movie (it's got too much to its credit to be "bad"), it's a disappointing one and one which fails to do what it's setting out to do.
Posted by Norma Desmond at 8:00 AM