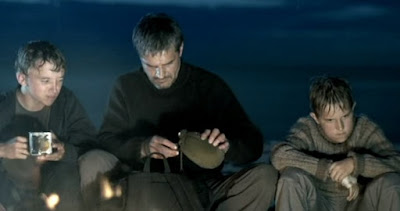 His arrival is seemingly out of thin air. Where has been? Why is he back? Why is he back now? What does he want? Is he even who they say he is? Andrey Zvyagintsev’s The Return raises these questions not to answer them, but to create a mood of unshakeable unease that allows the viewer to burrow into the mindset of its adolescent protagonists. Like those two kids, you never really know where you stand in The Return, whether you’re watching the story of a man who is genuinely trying to connect with the children he hasn’t seen in some time, not realizing that his hard nature and inexplicable behavior is pushing them away, or whether you’re watching the story of two children at the mercy of someone with a nefarious purpose, left in his care by a mother whose intentions might be good but ultimately misguided. The result is a spellbinding film that keeps you on the edge of your seat right until the very end.

The two boys are Andrei (Vladimir Garin) and Ivan (Ivan Dobronravov), who arrive home one day to their mother’s announcement that their father has returned after a 12 year absence. They’re shocked at the news and go looking for a photograph to compare to the man (Konstantin Lavronenko) who is now occupying the master bedroom, debating whether it's really him. Later, the family gathers around the table for an awkward dinner during which the father goes out of his way to assert his authority as man of the house, throwing off the balance of power and the relationship dynamics which have developed in his absence. During the dinner it is decided that the father will take the sons on a camping trip and in the morning the three set off, though things immediately start to go sideways. While Andrei is eager to please and gain his father’s approval, Ivan is seething with resentment and mistrust and consistently challenges his father, resulting in reactions that range from harsh to bizarre. When the three eventually make it to their isolated campground, Ivan begins to believe that the man isn’t really their father at all and may be intending to kill him and Andrei, a belief which is only bolstered when the man insists suddenly that they pack up their camp and then takes them to an island which appears to be uninhabited. As the man’s emotional brutality pushes Andrei and Ivan to the brink, his real motives begin to come to light for the audience. However, just as the story’s secrets begin to come out into the open, an intense turn of events between the man and the boys pushes everything back into darkness and doubt.

From a narrative perspective, The Return is a film which can easily frustrate viewers. The story raises a ton of questions that are never answered and throws in a subplot that, in a standard film, would provide the story with structure but is here just a bit of narrative sleight of hand. What this does, though, is recreate for the viewer the psychological position of a child who experiences a parent dropping out of their life and then suddenly reappearing without explanation, let alone apology. If a parent is absent, a kid might come up with stories to justify that absence to themselves and convince themselves that the parent wants to be there but simply can’t – a “dad’s a secret agent” story, for example. The film gives us no simple, straightforward answer because it is steeped in the perspective of Andrei and Ivan, who are trying desperately to explain to themselves where their father has been and to come up with a story that can be reconciled to their own feelings about his sudden reappearance. Things in the story don’t feel like they “stick,” or they feel like they’re constantly shifting, because the boys’ feelings about the situation are in constant flux. In particular, Ivan’s confusion and mixed emotions express themselves as terror and paranoia and so his mind goes to the darkest possible explanations. If he truly believes that his father was up to something (or that he wasn’t really his father at all), then it makes the tragedy of the finale easier for him to take.

There's a feeling of unease creeping through the film that makes it rather haunting, one which Zvyagintsev actively develops and nurtures, but one which also flows naturally from the premise and perspective of the narrative. To children the behavior of adults can sometimes seem mysterious and confusing, and The Return is built on a foundation of two adults behaving in such an enigmatic fashion that the whole thing really comes down to two questions: Why does the mother send the boys on the trip? What is the man really after? With respect to the first question, there are two possible answers that I see. One is that the man truly is the boys' father and she simply wants to give them all a chance to bond and reform a relationship after being separated for so many years. The other is that events at the beginning of the film have led her to believe that the boys have grown too "soft" as a result of growing up in the absence of a father or other male figure, so she brings in this man to pose as their father and take them on this trip in order to toughen them up and teach them how to be men. With respect to the second question, the film begins to reveal something of what the man is really up to once the story gets to the island, but the answers only raise more questions, making the film a mystery that can never really be solved, those questions forever floating around the edges of the narrative. Though The Return was Zvyagintsev’s feature debut, you wouldn’t know it from how confidently it unfolds or how tight and tense his direction is. The film walks a fine line but never takes a misstep, aided in no small part by the skilled performances by Garin (who died just weeks after the film completed production) and Dobronravov, who is such an intensely naturalistic actor that he’s captivating in every scene and every moment. I’ve never seen a film quite like The Return, which is so frightening and so strange and so psychologically and emotionally intense, and it’s one that I’ve never quite been able to shake since my first viewing. This is a film that truly takes on a life of its own.
Posted by Norma Desmond at 8:00 AM