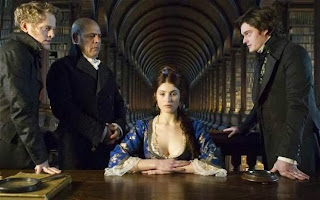 Neil Jordan's Byzantium is an odd duck of a film. In its first half it's a sleepily gothic romance, and then in the second it roars to life as a pseudo-feminist story about women seizing power denied to them by male dominated institutions. I liked the second half better, though the first half isn't bad, merely rather slow. A melancholy vampire story that manages to be both brutally and beautifully horrific (the image of a waterfall of blood is at once ridiculous and sublime), Byzantium is fairly transfixing once it gathers some steam and realizes which of its two female protagonists is the more interesting one.

The film begins with Eleanor Webb (Saoirse Ronan) throwing her hand written memoir to the wind and then entering into conversation with an elderly man who has picked up and read some of the pages. After ascertaining that the old man is ready to die, Eleanor takes his life, feeding her need for blood while also meeting her moral need to only take the lives of those who consent. In another part of town Clara (Gemma Arterton) is found working in a strip club by a man from her past, a man from whom she and Eleanor (though Eleanor does not know it) have been running for the better part of two centuries. Clara runs, the man gives chase and, eventually, she decapitates him, making it necessary for her and Eleanor to abandon the life they've created and start over somewhere new. They end up in a quiet coastal village that Eleanor is certain they've lived in before, though Clara denies it, and Clara quickly brings Noel (Daniel Mays), a lonely man who has just inherited a hotel, under her spell. She and Eleanor, posing as sisters though they're actually mother and daughter, move into the hotel, which Clara wastes no time in turning into a brothel in order to support herself and Eleanor.

Eleanor, meanwhile, enters into a tentative romance with Frank (Caleb Landry Jones), a sickly young man battling leukemia. Desperate to finally tell her story to someone, she writes out the fantastical tale of her life and lets Frank read it, which results in Eleanor coming to the attention of their school administrators, who are convinced that she's undergone something deeply traumatic in order to have written such a story. Eleanor insists that what she's written is true, leaving Clara to do damage control and to fill in the blanks in Eleanor's story. For two hundred years Eleanor has been convinced that she and Clara are the only vampires, but actually there is a secret society of vampires from which they've not only been denied entry due to the fact of being women, but that has been actively hunting them in order to kill them. The exclusively male society is known as The Brethren, which had allowed Clara to live after she deceived her way into immortality on one condition: that she never create another vampire. Clara agreed to their terms but after Eleanor, whom Clara had given up to be raised in an orphanage, was attacked, Clara turned her into a vampire in order to save her (as well as to alleviate her own loneliness), and the two have been running ever since. Now, with the story making the rounds through various people, the Brethren has once again caught up with Clara and Eleanor - and this time they're determined to kill them both.

Written by Moira Buffini (who wrote the fantastic 2011 adaptation of Jane Eyre in addition to the Arterton starring Tamara Drewe, a modern update on Far From the Madding Crowd), Byzantium takes a thoughtful approach to the now well-worn vampire story, treating immortality as a state of endless loneliness, sadness and rudderlessness. Eleanor and Clara live an existence without roots, one at once beyond and firmly enmeshed with humanity, and one in which they are at once forced to keep moving while also being firmly trapped within certain confides of existence. All vampire stories deal, on some level, with sexuality and here the vampirism of Clara and Eleanor is linked directly to their sexual victimization during their time as humans. Clara, kidnapped as a teenager and forced into prostitution, is dying as a result of the lifestyle when she seizes the opportunity for eternal life, and she turns Eleanor into a vampire after Eleanor is raped by the syphilitic man who forced Clara into prostitution in the first place, and who was supposed to be granted the immortality that Clara stole. Forced out of humanity by the abuse they suffer at the hands of men, they are then confronted by men who wish to deny them the other form of existence so that the act of creation and realm of immortality can be solely enjoyed by men. Although the feminist implications of the story only start to come to light in the second half of the film, once Byzantium seizes on the theme it really runs with it. However, while this allows the film to end on a strong note, it does make for a somewhat uneven whole. Moreover, the film doesn't have time to fully explore the theme, particularly in terms of the fact that Clara goes on to be someone who profits from the sex work of other women.

The first half of the film is driven largely by Ronan who, though a talented and very engaging actress, doesn't have a ton to work with in Eleanor as a character. Eleanor is basically defined by two things: she's very sad about the nature of her existence, and there's a big chunk of her creation story that she doesn't know because Clara has kept it hidden from her. Her romance with Frank is the stuff of just about every vampire story and would break no new ground even if Ronan and Jones had any chemistry. The more interesting character by far is Clara, whom Arterton imbues with a wounded sensuality and fierce will to live. She owns the film's second half and the film's change in focus from Eleanor to Clara wakes the narrative up from its gothic slumber. If only the whole film could have proceeded on those terms it would have been a lot more fun and considerably more interesting.
Posted by Norma Desmond at 8:00 AM