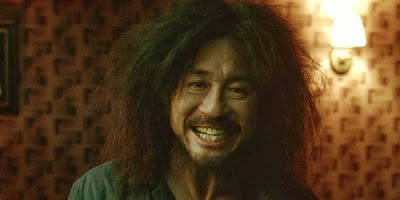 I’d tell you to forget about the recent remake of Old Boy, but that’s probably not necessary. If you only ever see one version of Old Boy, make it Park Chan-wook’s 2003 take, a visceral thriller that strips its characters bare as it folds back layer upon layer of narrative, punctuating its plot points with bloody action that, under Park’s assured direction, elevates violence to a state of aesthetic grace. The middle entry (and best) of Park’s “Vengeance Trilogy,” Old Boy is a story of revenge and redemption, told with both patience and blistering intensity. Beautifully crafted and executed, it’s an absolute masterpiece.

Old Boy centers its story of Dae-su Oh (Choi Min-sik), a seemingly hopeless alcoholic who, as the film opens, has been arrested for drunken disorderly. He’s bailed out of jail by a friend but then disappears, coming to sometime later in a locked room with no idea where he is or why he’s being held there. Days pass and he learns via the television in the room that his wife has been murdered. Their daughter has been taken into foster care and a manhunt is underway for him, as he’s the prime suspect in the murder. He’s devastated by the knowledge that his life as he knew it has been destroyed, that he’s lost his family, that even if he were to escape his current captivity, he would simply end up in another jail, but this isn’t the end of his torment. For 15 years he’s kept in the room with only indirect contact to the outside world in the form of his television and the delivery of food through a slot in the door. Then one day, without explanation, he’s returned to the outside world.

Although he’s been released back into the world, he’s far from free. He’s at the center of a game he doesn’t comprehend, aware only that someone is guiding him towards his destination and taunting him along the way. He meets Mi-do (Kang Hye-jeong), a much younger woman who takes him in and comes to love him, and Woo-jin Lee (Yu Ji-tae), the man responsible for what’s happened to him. Although he’s become proficient at killing by the time he confronts his tormentor, he can’t simply exact his revenge. “You won’t find out the ‘why’ of this if you kill me,” Woo-jin points out, “Fifteen years of being curious would go to waste.” So the game continues and Dae-su is given a timeline in which to solve the puzzle before more people he loves will be murdered. Fuelled by his desire to know the reason his life has been hijacked, and then get the revenge he’s been dreaming of for 15 years, Dae-su presses forward, eventually uncovering a truth so horrible he would have been better off not knowing.

Old Boy is has a tightly constructed narrative, one which continues building tension even as the layers of its mystery are pulled back, until it finally comes to its big reveal and then pulls out another trick by completely subverting expectations in the climax. It’s almost unheard of in an action/thriller film for the hero, whom the audience has followed from bad situation to worse and can’t help but root for, to come to the moment of his ultimate triumph and then surrender and completely degrade himself, but that’s what happens here – and it makes total narrative sense. The scene works both because of its unconventionality and because it shows how far Dae-su has come: he’s no longer the selfish man we met at the beginning of the film, but someone capable of sacrificing himself in order to protect someone that he cares about.

The screenplay, written by Park with Hwang Jo-yoon and Im Joon-hyeong, takes risks which gives Old Boy the opportunity to rise above the typical revenge thriller, but it’s Park’s skillful direction that drives it home. The film’s most famous scene is an extended one-take tracking shot in which Dae-su fights his way down a corridor which is so expertly executed that it puts to shame all those fast cutting, one figure indistinguishable from another sequences that pass for action in most films. In Park’s hands, Old Boy finds beauty in the brutal, and something damn near cinematic perfection.
Posted by Norma Desmond at 8:00 AM