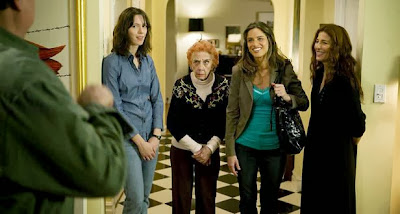 Netflix's top recommendations for me are getting better, although they still feel a bit random. This time my choices included Alpha Dog, Battle: Los Angeles, Omar Killed Me, The Lookout, Hoffa, Hansel & Gretel: Witch Hunters, Jack Reacher and Please Give. Having recently enjoyed Nicole Holofcener's Enough Said, and having been meaning to check out Please Give for some time now, that ended up being my selection and it turned out to be a pretty good one. Alternately darkly funny and heartbreakingly sad, Holofcener's meditation on death and guilt is a sharp and incisive character study - even if those characters aren't always people you might want to study.

Please Give is about two families who find their lives temporarily entwined. One family consists of Kate (Catherine Keener), Alex (Oliver Platt), and their teenager daughter Abby (Sarah Steele). The other consists of sisters Rebecca (Rebecca Hall) and Mary (Amanda Peet), and their grandmother, Andra (Ann Guilbert). Kate and Alex own the apartment next door to Andra and have recently bought Andra's apartment as well, allowing her to remain a tenant until her death, at which time they'll knock down the walls between the two residences in order to expand their own. This is merely an extension of what Kate and Alex do professionally, as they own a furniture store specializing in used items bought from the relatives of the recently deceased. The agreement with Andra has made for an awkward atmosphere between Kate and Rebecca, who is a frequent visitor at Andra's apartment, as Kate believes that Rebecca sees her as something akin to a parasite just waiting for Andra to die, and Rebecca believes that when Kate looks at her, she's wondering why Andra is inconveniencing them so much by not having died yet. As for Andra, having reached the age of 91, she's long since entered the stage where she just says whatever the hell she wants, whenever the hell she wants, regardless of how nasty it might be, so it's kind of easy to understand why everyone else is a bit preoccupied with thoughts of her death.

The two families become more deeply involved after Kate and Alex have Andra, Rebecca and Mary over to celebrate Andra's birthday. Mary has been far less dutiful a granddaughter than Rebecca, but has more in common with Andra in terms of personality as she, too, values brutal directness over basic kindness. Mary and Alex spend the evening flirting and are soon involved in an affair in which neither of them seems particularly invested. Meanwhile, Kate finds herself consumed by guilt both for the way that she's profited from the deaths of others and for how much she has in comparison to the number of disadvantaged people that surround her. She tries to make amends in various ways, many of them clumsy, such as when she offers her leftovers to a man outside a restaurant who appears to her to be homeless, but who is actually just waiting for a table (when she protests to Alex that the man looked homeless, Alex replies, "He looks like a black man waiting for a table!"), and by trying to do volunteer work, but being turned away due to her open pity for (and weeping over) those she'd be volunteering to help. She's trying really hard to do some good and one of the film's ironies is that, in the end, what seems to finally bring her some sense of peace is indulging Abby in a bit of ridiculous materialism, perpetuating the privilege that's making her feel so guilty in the first place.

Although Please Give has a plot, in a very loose way, it isn't really interested in narrative in a traditional sense (consider that aside from Andra's inevitable death and Kate and Rebecca's journey from awkward, defensive dislike of each other to something resembling friendship, none of the plot threads is really resolved). Instead, it's about watching the characters and the nuances of their interactions with each other. Take, for instance, the first scene of Kate and Rebecca, in which they find themselves in the same elevator. Kate politely tries to make small talk and Rebecca responds with what Kate takes for rudeness, but which the viewer comes to recognize as merely a feature of Rebecca's shyness and social awkwardness. Or take a scene later in the film between Abby and Mary in which Abby takes for granted that she forged a connection with Mary the night of Andra's birthday party and discovers that it was one of those passing, situational things gone as quickly as it appears. These moments work because of the amount of restraint Holocefner shows as a director, never forcing anything but instead letting the characters proceed according to their own momentum.

The cast, of course, goes a long way in this regard. Although Kate and Alex are characters who, on paper, would be easy to hate, in Keener and Platt's hands the edges are softened and they become easy to feel for - if not easy to feel sorry for, exactly. Kate's growing discomfort with her role in the world, and her inability to quite grasp that other people can be perfectly content even in the absence of the comforts and privileges that she enjoys, are the driving force of the film's second half, and the moment when she and Rebecca finally come to understand each other is one of the film's most moving scenes. But, really, the film's MVP is Hall whose sweet-natured Rebecca is the film's most tragic, but also most hopeful, figure. Connection might be difficult for her, but once formed she's expert at nurturing it and if the film were only about her, her difficult relationships with her grandmother and sister, her tentative romance with the grandson of a woman she treats as a radiology technician, it would still be entirely worth watching.
Posted by Norma Desmond at 8:00 AM