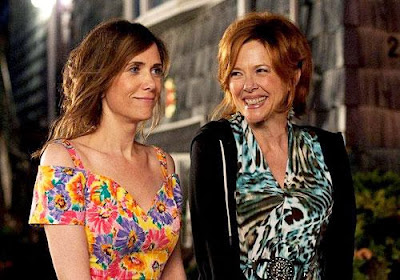 Girl Most Likely to... what, exactly? Certainly not to be the protagonist of a movie that carries itself like its screenplay has been through more than one draft. I'm not sure how so many talented people ended up joining forces for such a bizarre mess of a movie, but here it is. If you're thinking of checking this one out, I highly recommend just watching the trailer because all the funny jokes are there and you get them without having to suffer through the nonsensical and shapeless plot, which is less a cohesive narrative than it is a series of ideas for potentially funny scenarios that never really develop into anything.

Kristin Wiig is Imogene, a would-be playwrite who squandered her early promise and now writes blurbs for a theater magazine. Within a short span of time she's dumped by her long-term boyfriend and loses her job, prompting her to make a phony suicide attempt which becomes a real suicide attempt in order to get her boyfriend back. Instead she ends up being remanded to the custody of her estranged mother, Zelda (Annette Bening), who has impulse control problems and a gambling addiction. Zelda brings Imogene back to her childhood home in New Jersey, where she's reunited with her socially awkward brother, Ralph (Christopher Fitzgerald), and introduced to her mother's boyfriend (Matt Dillon), who calls himself George Bousch and claims to be a CIA agent and samurai, and Lee (Darren Criss), who has been renting what was once Imogene's room. Imogene attempts to escape back to New York, but finds that she's been evicted from her apartment and her friends are unwilling to give her a place to stay and so is forced to slink back to New Jersey to try to regroup. Oh, and also: she finds out that her father, whom she thought died when she was a kid, is actually alive and that when her parents split up they decided that divorce would be too traumatic for the kids to deal with so instead he'd just disappear from their lives forever and Zelda would tell the kids that he was dead.

That's not insane at all, right? Believe it or not, that plot thread gets even more insane when Imogene and Ralph track down their father, who is now a world-renowned historian and exceedingly wealthy and feels absolutely no remorse about not having seen his children in decades or provided any form of financial support for them whatsoever. The character is played by Bob Balaban and, though I can't really blame him for not knowing what the hell to do with this character, he does come off like either a robot or an extraterrestrial who has taken on human form in order to blend in with our kind. There's not really any resolution to this plot beyond Imogene realizing that he's an ass after meeting him... because for some reason that fact wasn't apparent to her when she learned that he faked his death instead of helping to raise and support her because doing that would have been, like, complicated and stuff.

The screenplay by Michelle Morgan also incorporates a romantic plot between Imogene and Lee which is so inconsequential and free of conflict that it isn't worth writing about, a plot involving Ralph, who is obsessed with crabs, having built a bulletproof, fiberglass exoskeleton for protection, and George Bousch's CIA plot which brings about the film's truly WTF? climax right before the film flashes forward to when things... just kind of work out. There are several germs of a story buried within Girl Most Likely but none of them are actually nurtured into any kind of arc and they're all just sort of slammed together haphazardly in a way that favors random acts of zaniness over an actual story that makes sense and involves people behaving in ways that are familiarly human. The characters are reduced to the level of live-action cartoons, any attempts they make to become real undercut by the unreasonable demands of the screenplay.

Although Imogene has a few shades in common with Wiig's character from Bridesmaids, this endeavor lacks both the sharpness of that film and the comic energy generated by the chemistry of its cast, and so Wiig's understated performance merely helps to underscore the film's structural problems. She fares marginally better than the rest of the cast, insofar as the film is at least a little bit invested in her character, which can't be said of those in the supporting ranks. Despite being obviously game, Bening and Dillon are given next to nothing to do and provided with absolutely no narrative consistency to support their characters. With the amount of talent it has in front of and behind the camera, Girl Most Likely could have been something, but instead it's just a lot of nothing.
Posted by Norma Desmond at 8:00 AM