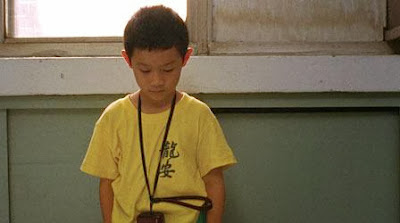 A wedding, a birth, and a funeral. Common occurrences, all, and the tent poles around which Edward Yang hangs Yi Yi, a thoughtful and moving portrait of an ordinary family struggling against the changing tides of life itself. The setting of the film is Taiwan, but the story is so universal that it could be about any family anywhere in the world, and with its complex, beautifully realized characters whose disappointment, longing, and hope are easily accessible and relatable, it proves that the absolutely ordinary can be completely captivating in the right hands. Yi Yi may be a quiet film, but it’s a quiet masterpiece.

Yi Yi begins with the wedding of Ah-Di (Hsi-Sheng Chen), an event long delayed (as evidenced by how pregnant the bride is) so that it will fall on a “lucky day.” Given that Ah-Di’s ex-girlfriend crashes the reception to pronounce that it should have been her marrying Ah-Di, and that his mother falls ill, suffering a stroke which sends her into a coma, you have to wonder what disasters would have befallen him on an unlucky day. The mother is cared for by her daughter, Min-Min (Elaine Jin) and son-in-law NJ (Nien-Jen Wu), who have two children: teenage Ting-Ting (Kelly Lee) and 8-year-old Yang-Yang (Jonathan Chang). Caretaking quickly becomes too much for Min-Min, who becomes intensely aware of how unfulfilling her life is once she’s confronted day after day with how physically fragile human beings are and how quickly a life can come to an end. She goes away to a monastery in an effort to “find herself,” but instead encounters the same emptiness she felt at home. Meanwhile, NJ reconnects with Sherry (Su-Yun Ko), an ex-girlfriend whom he encountered by chance at the hotel where the wedding reception was held.

The children aren’t without their problems, either. Ting-Ting has developed a friendship with the girl next door, but also harbors a crush on her new friend’s boyfriend. When the friend and the boyfriend break up, it seems like Ting-Ting might reap the benefits of the split, but the fallout is painful and traumatic. For Yang-Yang, life is a mixture of torment and wonder, where he’s picked on at school by both classmates and a teacher, but kept afloat by his curiosity about the world around him and the unique perspective of it that he develops. It is in him that the film finds its sense of hope and the promise that he will find a way to break the cycle of boredom and monotony that has enveloped the adults in his life.

Yi Yi moves slowly, unafraid to simply watch the characters and trust that the audience will find them and their relationships engaging. Things happen, some of them life altering in their importance, but Yi Yi is more about how the characters deal with events, using the big things to add texture to the everyday, smaller things. Some of the major events aren’t even shown, the film focusing instead of their aftermath and using that strategy to distil the emotions that arise from them. The family matriarch’s stroke, for example, not only occurs off-screen but is revealed as having happened well after the fact. The remove with which Yang unfolds events does nothing to diminish the intimacy of the narrative and instead underscores the loneliness and isolation of the members of the family. Despite this, Yi Yi is not a depressing movie; it has moments of great warmth mixed in with moments of profound sorrow, and above all it is alive and deeply in touch with the rhythms of life.
Posted by Norma Desmond at 8:00 AM