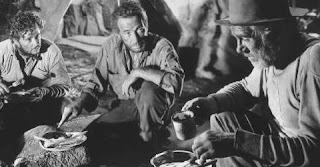 “I know what gold does to men’s souls,” the old man says in this film that looks like a western, but plays like the deepest of psychological dramas. Writer/director John Huston perfectly balances a narratively intimate character study with larger than life entertainment and in the process gives Humphrey Bogart the best character he’d ever play. Greed, paranoia, treachery, action, adventure and madness are all woven seamlessly together in this one of a kind film.

Bogart, Walter Huston and Tim Holt star as Dobbs, Howard and Curtin, three Americans who set off into the mountains of Tampico, Mexico to make their fortune in gold. Of the three, only Howard is an experienced prospector, a man whose exuberant eccentricities hide an observant, knowledgeable person. Before they’ve even set off, he pretty well knows how things will turn out, his words laced with warning. “As long as there’s no find, the noble brotherhood will last, but when the piles of gold begin to grow, that’s when the trouble starts.” Given his past experiences, it’s a wonder that he goes at all, but the promise of gold is enough to overcome any misgivings and, besides, he knows that without him, Dobbs and Curtin would be done for.

True to Howard’s prophesy, the partnership begins to go sour once they start to find gold. Dobbs, in particular, insists on dividing the loot at the end of each day, rather than simply dividing the money after they’ve returned to civilization. It’s here that the film begins to seem claustrophobic, giving us more frequent close-ups, having the characters occupy smaller spaces together and letting the camera close in tightly on them (many shots are set-up to make it look as if the three are practically standing on each other so that it seems as if there’s not enough room for all three and the camera on what is meant to be a wide-open mountain). The paranoia implied by immediately separating the shares is increased by the fact that all three hide their shares at the end of each day, making them naturally suspicious whenever one of the others disappears on some unexplained errand. In one scene, Curtin accidentally comes across Dobbs’ share, almost leading to a showdown between the two.

Besides having to contend with their own psychological turmoil, the trio is in for more grief with the arrival of Cody (Bruce Bennett), a fellow American who meets Curtain when he goes back to town for supplies and then follows him back up the mountain and tries to muscle his way into the operation. Shortly after Cody come a gang of bandits and the film’s most famous line: “Badges? We ain’t got no badges! We don’t need no badges! I don’t have to show you any stinking badges!” Cody is killed by the bandits, who are run off by the approach of the Federalis, and Dobbs, Curtain and Howard are free to make their way back to town with their loot. After Howard is separated from them, Dobbs’ madness takes over and he kills Curtin (or so he thinks), determined to make off with all the money himself, not stopping to think that it might not be such a good idea for a man to try to make his way through bandit country on his own.

While the film can function on the level of pure escapist entertainment, it also functions on a deeper level, where it exposits an anti-Colonialist/anti-Capitalist message. The pursuit of wealth – specifically of wealth to be hoarded by one person – is characterized not only as bad, but as dangerous, and the act of foreigners coming into a place and staking a claim where they have no right is shown to be futile. Aside from the fact that Dobbs is willing to kill anyone who comes between him and the loot, there’s also the fact that Dobbs and Curtain are brought together in the first place by McCormick (Barton MacLane), a fellow American who cons them into working his oil field and then attempts to cheat them out of the money owed to them. But the trio isn’t really better than McCormick, because they, too, engage in shifty behaviour in order to retain something that isn’t rightfully theirs. They have no real claim to the gold in the mountains, a fact which they fully admit to each other and which necessitates disguising the mine and camping elsewhere to make it look like they’re just hunters. However, the knowledge that the gold isn’t rightfully theirs doesn’t stop them from taking it, or from being willing to kill anyone who comes near it. In Dobbs' descent into madness we see played out on a smaller scale the greedy, brutal mentality of every Colonialist expedition to enter a foreign place and slaughter whomever was in the way in order to secure land and goods. When the gold is found dumped on the ground and being swept back into the mountains by the wind, Howard is right to laugh because it’s only fitting. It was never “their” gold and now it’s being returned to where it belongs.

Of the three main actors, Huston was the only one to be nominated for an Academy Award (which he won). Bogart would have been equally deserving, fully committing to Dobbs’ descent into insanity and desperation (regardless of what Dobbs has done beforehand, it’s difficult not to feel for him when he’s cornered by the bandits at the end and attempts to talk his way out of it), delivering soliloquies which attempt to justify what he’s done and convince himself that he’ll get away with it. As Curtin, Tim Holt has an unfortunate role, stuck as he is between these two giants of characters. However, he does a serviceable job, acting as the balance between the two extremes played by Huston and Bogart. As a director, Huston only makes one misstep, and that’s in showing Howard’s time in the Indian village, which completely detracts from the tone the film has built up until that point. It’s a scene that belongs in a different movie and it’s jarring to see it played out here. But, leaving that aside, what Huston delivers here is a taut, effective psychological drama that has been often imitated, but will never be surpassed.