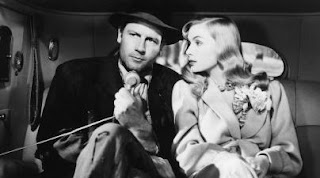 Sullivan’s Travels is Preston Sturges’ defence of comedy as an art form, and a figurative thumbing of the nose at the notion that comedies are somehow inherently inferior to dramas – a ridiculous idea given that some of the best and smartest films ever made have been comedies (and no shortage of those were directed by Sturges). Taking place in Hollywood and centering on a director (the titular Sullivan), the film satirizes the business of making movies and the conventions of romantic comedies (particularly of the opposites attract/love on the run variety popularized by It Happened One Night) while coming to the conclusion that, while the genre might not offer much prestige, the world ultimately needs a good dose of comedy.

Sullivan is played by Joel McCrea, who is quite possibly the most underrated actor ever to come out of Hollywood. He brings so much to this role, infusing Sullivan with lightness and warmth and ensuring that he isn’t simply a clown, a pawn at life’s mercy. Sullivan is a popular director of comedies who wants to break into “serious” pictures. “I want this picture to be a document. I want to hold a mirror up to life. I want this to be a picture of dignity! A true canvas of the suffering of humanity,” he tells the studio executives, who eventually relent when he agrees to put “a little sex in it.” These initial scenes are razor sharp as Sullivan and the studio people dissect what makes a film work, what makes it speak to the populace, and come up with a plan for Sullivan to connect to this “common man” he wants to capture on film. Sullivan will go out on the road and experience life as a hobo – complete with studio costuming to make him look the part, and a studio crew following him at a short distance in an RV.

Sullivan’s “journey,” however, proves to be less than enlightening and plays out as a reversal of Homer’s Odyssey. In the classical story, the hero is continually waylaid as he tries to get home. Here, Sullivan is continually trying to get away from home, but through various mishaps keeps finding himself right back where he started. Along the way, however, he picks up a girl (credited simply as The Girl – because all pictures need a girl – and played by Veronica Lake), an aspiring actress who disguises herself as a boy and accompanies him on his trip where, eventually, he does see some of the life he wants to capture on film.

That Sullivan and The Girl fall in love is a matter of course, but how Sullivan comes to his great realization about the importance of comedies is something of a surprise. After experiencing life as a hobo, Sullivan decides to anonymously give money to some of the people whose paths he’s crossed, a decision which results in him being knocked out, losing his memory, being mistaken for something he’s not and taken to jail, where he works on a chain gang. Now he’s experiencing real hardship of the kind he couldn’t have imagined. At the end of an arduous day, the gang is treated to a movie, a Mickey Mouse cartoon. Sullivan watches the other men as they watch the movie and laugh, and he laughs, too, finally coming to appreciate this form he’s been so intent on rejecting. When he finally regains his identity and gets out of jail, he tells his bosses that he no longer wants to make a film about suffering. “There’s a lot to be said for making people laugh. Did you know that that’s all some people have? It isn’t much, but it’s better than nothing in this cockeyed caravan.”

I’ve already mentioned my admiration for McCrea, but the supporting cast should not go unmentioned. Robert Greig and Eric Blore are on hand as Sullivan’s butler and valet, both turning in wonderfully funny appearances. Greig especially makes an impression as Sullivan’s drole and understated butler, who attempts to talk him out of his expedition by pointing out that “the poor know all about poverty and only the morbid rich would find the topic glamorous” – a truth that echoes in Sullivan’s own discovery that people in despair don’t want to experience more despair, but rather want something to counterbalance it and lighten the emotional load. As for Veronica Lake, prior to seeing this film I’d always been more aware of her as an image rather than as an actress, but she’s quite winning here. There isn’t a whole lot to the part (after all, she is just “the girl”), but what’s there, she delivers and she has a nice, easy chemistry with McCrea.

The screenplay and direction by Sturges are so self-assured, so perfectly measured, that it makes it look easy, which of course it isn’t. A good comedy is hard to find and even harder to make, and sometimes even having all the right elements doesn’t make a film add up. Consider, for example, the more recent O, Brother Where Art Thou?, which owes much to this film (the “document” Sullivan wants to make is, in fact, titled O, Brother Where Art Thou?). It is directed by Joel and Ethan Coen and stars George Clooney and Holly Hunter – Oscar winners all, and first rate performers in their respective fields. Together they created a film that is entertaining, but ultimately fails to work. It’s a film that should work, but somehow just falls short. Sullivan’s Travels, on the other hand, has that magic something that just makes everything gel. Watch it once and you’ll find yourself coming back to it time and again.

Posted by Norma Desmond at 7:00 PM