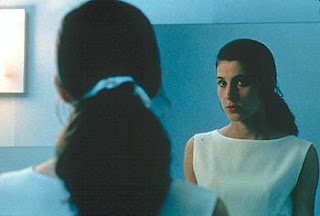 Catherine Breillat’s Romance is nothing if not a challenging film. It challenges conceptions of gender, sexuality and power, and blurs the distinction between art and pornography. From a feminist standpoint, it can be a difficult film because it directly engages with an issue which remains divisive within feminist discourse, namely the limits of acceptable expression of female sexuality. When you watch the film, you cannot escape from having to ask yourself if Marie, the central character, is empowered by her experiences or simply a victim who has been conditioned to like that which oppresses her.

The story begins with Marie (Caroline Ducey) arguing with her boyfriend, Paul (Sagamore Stevenin) over the fact that they’ve stopped having sex. He insists that this is normal, that if they wait it out a few months perhaps it will start up again. The agony for Marie is not that he can’t have sex, it’s that he won’t. “It’s because you despise me,” she tells him. She begins seeking sexual fulfilment elsewhere, first with a man she meets in a bar (Rocco Siffredi), later with a random man she passes on the stairs, and in between with Robert (Francois Berleand), the principal of the school where she teaches. To look at him, you wouldn’t automatically peg Robert as a Casanova, though he claims to have been with 10,000 woman (“Several a day”), and it’s unclear whether he and Marie actually have intercourse as we only see them engaging in bondage play. Eventually, Marie becomes pregnant by Paul and it is here that the film moves away from narrative to fully embrace the symbolic.

From the beginning, Breillat stacks the deck in terms of symbolism. It opens with Paul, eyes closed, being made-up. At first he looks like a corpse, but he’s actually a model getting ready for a photo shoot. With these first images, Breillat is not only establishing for us Paul’s passivity (“I thought you’d let me disappear,” he tells Marie at one point), but also foregrounding the idea of sex and sexuality as performance as we watch the photographer direct Paul, dressed as a matador, in poses which suggest virile masculinity. Later, Marie meets a man in a bar played by porn star Rocco Siffredi. Breillat presents us with an explicit encounter between the two, which may or may not be real (Siffredi and Breillat say yes, Ducey says no) – again, this is performance. Later still, we’re confronted with the layout of Robert’s home, which resembles a stage, and we watch as he methodically binds and poses Marie as if he’s moulding a sculpture. With the exception of her encounters with Robert – whose focus is specifically on Marie as subject, rather than on Marie as object of his own pleasure – Marie’s sexual experiences are spectacularly joyless. She loves Paul, but is stung by his rejection. She doesn’t love the Siffredi character (not coincidentally named Paolo), but he’s willing to provide her with all the sex she wants. She is only getting half of what she needs from either man.

Marie becomes pregnant accidentally in what is, more or less, a virgin conception. She becomes symbolic to Paul, who drags her around to bars as a testament to his virility. Giving birth purifies a woman, she is told at one point. She has a fantasy sequence in which she lies on a bed, divided by a wall. Her top half is in a maternity ward, preparing to give birth while on the other side the bottom half is in a brothel. She is at once Virgin and Whore, the men on either side of the wall unable to recognize that both can exist in the same woman.

The transition from Virgin to Whore to someone in between is marked by costume and art direction. Marie and Paul reside in a home that resembles a hospital in its sterile, blinding whiteness. When she stands beside the bed where he is laying, she resembles a nurse tending to a patient. The color pallet of her wardrobe remains white and light grey up until she gets involved with Robert. Suddenly she stands out in her home, a burst of color against the bland surroundings as she enters wearing a red dress. This is what she’s wearing when she climbs on top of Paul and tells him he can be the woman, she’ll be the man. At the end of the film, after she has given birth and Paul has died (by her hand), she wears black, a color residing somewhere in between the purity of white and the suggestiveness of red.

Romance was a controversial film when it was released because of the graphic nature of the sex scenes and the suggestion that such scenes were not simulated. But it was also controversial because people didn’t know how to process it. Many men will be put off by the way male sexuality is depicted in the film and many women will be made uncomfortable by aspects of Marie’s sexual expression, such as her rape fantasies. But I think this is exactly what Breillat intended, to unsettle the audience and make us expand and reconsider our conceptions of sexuality and sexual expression. Despite its title, this isn’t a romantic film. Despite its subject, it isn’t a sexy film either. This is a film that seeks to engage your mind and in this respect it is absolutely successful. It’s a film you’ll think about long after you’ve finished watching it.

Posted by Norma Desmond at 6:15 PM

Explore more blogs at
Free Blog Directory - A collection of links that helps peoples to find their interest!