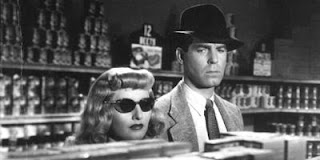 Why does he do it? It’s the central question of Billy Wilder’s noir classic. It’s easy to say that he’s seduced into it, but watch that scene closely. It doesn’t take much for Phyllis Dietrichson (Barbara Stanwyck) to talk him into it. As a matter of fact, it appears as if Walter Neff (Fred MacMurray) has been waiting for just such an opportunity to present itself. It’s what’s always intrigued me about this film, Neff’s motives, which on a base level appears to be sex (in the form of Phyllis) and money (in the form of the money Phyllis will get from her husband’s “accidental” death), but is actually much more twisted. Neff does it simply to see if he can get away with it. The detachment that this implies, and the coldness that radiates from both Neff and his femme fatale give the film sharper edges than even your most hard-nosed noirs.

It begins with Neff, an insurance salesman, already dying, recording his confession to his boss, Barton Keyes (Edward G. Robinson). What’s ingenious about the way Wilder tells the story is that he allows it to play out in two different, competing ways. What we hear is the voice-over narration in which Neff relates the story to Keyes, but what we see is how Neff relates the story to himself. Both versions have the same plot – Neff and Phyllis meet, discuss insurance, come up with a plan to kill her husband, execute it and then turn on each other – but the tone is distinctly different. In the voice-over, he sounds like a man smitten, blinded by his lust for the fetching Mrs. Dietrichson who appears to him for the first time wrapped in a towel at the top of her stairs, her ankle bracelet catching his eye. “I killed him for money – and a woman – and I didn’t get the money and I didn’t get the woman,” he says, framing it as a matter of lust and greed, because while those are motives that people can understand, boredom is not.

That the true motive is boredom – on the part of both Neff and Phyllis – underlies the way they interact. The banter they engage in is charged in a different way than you usually see in noir, as if they’re just saying what people in their situation ought to say, pretending that they’re talking themselves into something that they’ve both already decided on, and pretending that they’re talking themselves into love and/or lust with each other simply because that’s what one does in this situation. These are two very cold characters, and their dialogue is clipped and crisp. There is no warmth, no tenderness between them (the only time we see either emotion from Neff is at the end when he says “I love you, too”… to Keyes), no fire when they’re playing at being in love or after they’ve turned on each other, only when they’re committing their crime (the look on Stanwyck’s face as she waits for the moment when her husband will be killed is deliciously evil).

Stanwyck and MacMurray are both perfect in their respective roles, each walking a fine line in terms of how much to give and how much to hold back. You can certainly see how Phyllis could have lured Neff into her web, had that been necessary, and you can see how Phyllis might have been attracted enough to Neff that it put the idea in her head to rid herself of her husband once and for all, because Stanwyck is just alluring enough and MacMurray is just charming enough, but they’re also just detached enough from what they’re acting out that you can believe they’re only using each other as an excuse to do something that each of them wants to do anyway. Again, what makes this film so brilliant is that Wilder presents the story in such a way that we’re seeing it both as it might have happened and as it did happen in each and every scene.

The cinematography by John Seitz is superb, giving the scenes shadows that are very severe and distinct. There is frequent use of the shadows cast by Venetian blinds, which fall across the characters faces to look like bars, suggesting just how trapped they’ve become by their own machinations. The lighting adds to the way that the scenes become increasingly claustrophobic as the story goes on. “Suddenly it came over me that everything would go wrong. It sounds crazy, Keyes, but it’s true, so help me. I could hear my own footsteps. It was the walk of a dead man.” How Neff knows it will all go wrong could be tied to his motives for committing the crime in the first place. Does he do it in order to be caught? The fact that he returns to the office in order to record his confession to Keyes seems to suggest as much. Was it part of his scheme all along, making this a long, convoluted suicide? That you can’t answer for sure is part of the film’s strength and what makes it worth coming back to time and again.