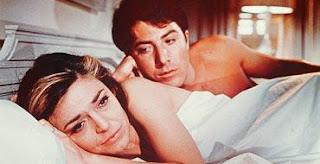 The Graduate is a film that you have to see at a certain time in your life in order to fully relate to it. If you’ve just graduated from University and haven’t yet started your career (or even decided on your career path), you’ll relate to Benjamin Braddock’s ennui, his “Now what? Is this it?” attitude, his embarrassment at his parents’ aggressive pride in him, and his need to be left alone. But, if you see it again later, after you’ve passed through this stage, you’ll find yourself wondering why it has to be the story of Benjamin’s affair with Mrs. Robinson, rather than of Mrs. Robinson’s affair with Benjamin.

Mrs. Robinson (Anne Bancroft) is the story’s most interesting character, mostly because she’s the only one with character. Benjamin (Dustin Hoffman) and Elaine (Katherine Ross) are as lacking in depth as they are in experience. These are suburban kids who’ve grown up in a relatively insulated world where nothing really bad has ever happened to them, and who are more or less the passive playthings of life. Benjamin’s parents are shiny, happy people who would like nothing more than for their son to graduate from college and come home to marry the girl next door. They don’t have personalities outside of Benjamin. Mr. Robinson exists mostly on the fringes as the “villain,” if the film in fact has one. Mrs. Robinson is the only character who is really alive, though we see how she suffers in her life. There is an undercurrent of boredom in the film, the boredom of having everything you want coupled with the pretence that it makes you happy. But Mrs. Robinson adopts no pretences. She’s bored and unhappy and pursues Benjamin less because she can’t resist him (she can do better and she knows it) and more because he’s the one who happens to be there.

And Benjamin really is just “there.” He comes home, passively allows himself to be paraded around by his parents for their friends, who ask the inevitable (and inevitably unanswerable) questions about his future, and give him advice like, “Plastics” (“Plastics,” Benjamin repeats, his voice flat and emotionless). He spends days just floating in his parents’ pool, simply existing, not really doing anything. Even when he begins the affair with Mrs. Robinson, there’s still the sense that he’s not really doing anything. There is one scene where Mrs. Robinson attempts to remove a spot from her blouse. Benjamin walks up behind her and grabs her breast and she… just keeps working the spot. He’s her accessory and she’ll pick him up for use when she’s ready to use him – and in between those times, there’s Benjamin, floating in the pool.

Benjamin gets involved with Elaine at his parents’ insistence and falls in love with her in spite of himself and to Mrs. Robinson’s fury. Elaine learns the truth (in a great scene between Hoffman, Bancroft and Ross where the final pronouncement isn’t delivered verbally, just through looks) and runs away back to school. Benjamin follows her and manages to work his way back into her life. Why does she want anything to do with him? I don’t think it’s a stretch to say that it has a lot to do with the fact that she’s now about to enter into her own shiny, happy suburban marriage and sees in Benjamin a chance of escape into something more exciting, something forbidden and troublesome. It’s a burst of colourful drama in what is shaping up to be a black-and-white life. And what could be more colourful and dramatic than Benjamin stopping her wedding? How could she not make the most of this opportunity and run off with him?

Part of what makes The Graduate so good is the way that it speaks to you differently at different times in your life. This isn’t a static film; it shifts with you as your own life shifts. At one point you may see Benjamin as a flawed hero, his relationship with Elaine as compelling. At another, you’ll see Benjamin as an empty vessel waiting to be filled, his relationship with Elaine as a romanticized vision of what love should be. In either interpretation, Hoffman is ideal as Benjamin, alternating between cool indifference, and the nervous anticipation we see – especially in his early scenes with Mrs. Robinson – as he attempts to prepare for the fact that something is about to happen in his life. Bancroft, too, is marvellous, giving Mrs. Robinson layers and dimension and not allowing her to simply be the lonely housewife. This is a very real character and not the caricature that popular culture has made of the “Mrs. Robinson” type.

The film ends exactly as it should, not with the adrenaline fuelled flight from the church, but with it’s aftermath. Benjamin and Elaine sit beside each other on a bus, neither speaking, not even really looking at each other. When asked what happened to them, director Mike Nichols once stated that “they ended up just like their parents,” which must be true because Benjamin and Elaine ultimately lack the imagination to make themselves anything else. You can see it in their faces at the end: Now what? Is this it?