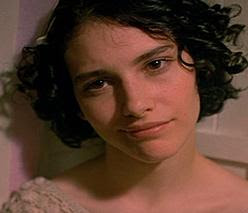 New Waterford Girl is a delightful comedy with a lightness of touch that is admirable. It’s characters are quirky without being burdened by the weight of their quirks, it doesn’t stamp itself with false sentimentality, and it gives some interesting twists to what is in essence a very standard story. Moonie Pottie (Balaban) is fifteen years old and lives in Cape Breton – “God’s country.” She’s alienated, outcast and sarcastic, and dreams of moving to New York to be an actress. Think you’ve seen this movie, more or less, with a different name and different actors? You couldn't be more wrong.

The film takes place in the 1970s and opens with a voice-over by Moonie sarcastically describing how wonderful it is to be a teenager in Cape Breton. She is embarrassed by and resentful of her family in the way that many teenagers are. She has four siblings and no room to call her own (after being ordered to her room by her father, she replies: “I don’t have a room, I sleep in the hall, remember?”) and finds her parents a consistent source of irritation, especially in the ways they try to get her out of whatever book she’s reading and into the world to be social, like her sisters. With the exception of her teacher Mr. Sweeney (Andrew McCarthy), she doesn’t have much in the way of friends until a mother and daughter from New York move into the house next door. Moonie is resistant, at first, to the attempts made by Lou (Spencer-Nairn) to befriend her, but eventually succumbs, resulting in some of the film’s most charming sequences such as when Lou decides that she and Moonie are going to cruise the town’s main “strip” only to find that it consists of one short road that turns onto a dead end. “What are we supposed to do?” Lou asks, “go back down and pretend they’re different guys?”

Lou and Moonie go to a party which sets the main plot in motion and also sparks a subplot. The subplot involves Lou becoming the deliverer of a kind of vigilante justice on behalf of the wronged girls in town after she punches a guy at the party and knocks him out. His girlfriend is happy with the result, explaining that he needed a good knocking around and soon other girls are paying Lou to punch their boyfriends. Lou justifies herself through her theory that the guilty always fall down when punched, and all the guys she’s punched so far have fallen down. Eventually she’ll be coerced into entering the ring with a male boxer from a neighbouring town, the community having agreed that she’s their best chance at actually winning the event for once.

The main plot, of course, involves Moonie. Although the town is predominantly and deeply Catholic, there are nonetheless a number of girls at school who are officially sent away to visit relatives, but are in actuality going away to have a baby and give it up for adoption. This gives Moonie an idea for getting out of town and she begins going around making out with several guys, knowing that they’ll tell people they slept with her and that she can create the impression of sexual activity without actually having to engage in it. She feigns pregnancy in order to get out of town, planning to take a detour to New York where she has won a scholarship to a performing arts school with the help of Mr. Sweeney. It’s easier said than done though, especially when she’s faced with her parents’ reaction to the news, particularly that of her heartbroken mother. The truth eventually comes out but Moonie is allowed to go to New York anyway. In her closing voice-over she ruminates again on her hometown, this time in a much softer, more nostalgic way, leaving us with an ending that is bittersweet but absolutely earned.

In certain respects this is a very predictable movie and there are plot elements that don’t really work - Moonie’s relationship with Mr. Sweeney, for example. However, it is also a very funny and enjoyable film to watch. Liane Balaban gives a winning performance as Moonie, a character who could have easily been reduced to a tangle of teenager cliché’s but instead rises above, largely on the strength of Balaban’s performance. Mary Walsh and Nicholas Campbell are similarly excellent as Moonie’s parents, and Tara Spencer-Nairn is engaging as Lou, even though the character isn’t given much room for growth. All in all, this is a film that transcends the conventions and clichés of its type to create something new and different, and is ultimately a movie you’ll want to watch again.

Posted by Norma Desmond at 6:31 PM