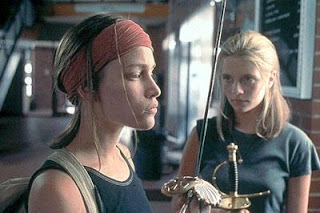 Lost and Delirious is a film that is almost painfully unflinching in its portrayal of teenage angst. It can be difficult, at times, to watch. While the film deflates somewhat when it verges to far into the symbolic, the moments grounded firmly in reality can be very powerful. The spectre of tragedy hangs over the film from the moment it begins – the tropes of the genre stand out almost like flags – and it unfolds in a way that compels us to see it through to its conclusion, even if we don’t necessarily “want” to see how it ends.

The film takes place at an all girl’s boarding school. We’re introduced first to Mary (Misha Barton), a shy and quiet girl, an observer who essentially becomes our surrogate. She shares a room with Paulie (Piper Parabo) and Tori (Jessica Paré), who don’t let Mary’s sudden presence disturb their nocturnal habits. The first time she sees them together is from afar and she tells us in a voiceover that she thought they were just practicing for when they were with boys. This line is telling not because of what it tells us about Mary, but because of what it tells us about Tori. At one point Tori explains her attitude towards boarding school by likening it to a fantasy: “This is much more home to me than home. Like the lost boys in Peter Pan. Except we’re the lost girls.” There’s a separation for her between the “real” of her home life and the “fantasy” of life at school. The tragedy is that Paulie doesn’t pick up on this and, unlike the audience, is surprised when Tori breaks up with her to be with a boy. Tori’s decision stems partly from the homophobia of those around her, but her own internalized homophobia is what ultimately drives her. The real world and the fantasy world are never meant to collide, and Paulie’s inability to understand the way that Tori has compartmentalized her life are what ultimately leads to her undoing.

Paulie is easily the most interesting character and is well-played by Parabo. She’s your typical bored, sarcastic teenager who has to be pushed by her teachers in order to put in the effort to realize the potential that they see in her. She carries herself as if she’s tough, but in reality she’s as delicate as an exposed nerve. She’s intelligent, but lacks the emotional maturity and life experience to deal with feelings made all the more intense by the fact of living in this very insulated world. Basically, she’s a character of extremes. When Tori breaks up with her, her solution to get her back is to march into the library (with a sword no less), stand on a table, and recite poetry to her. Later, she challenges Tori’s boyfriend to a duel. As the film progresses, she becomes more difficult to watch. You just know that she's willing to harm herself as long as it makes a point.

The film plays out at a level of intensity tailor made for teenage angst, escalating as if nothing will ever be as important as what is happening right at that moment. It’s one of the film’s strengths that it adapts itself to this pace, submerging us in this cloistered world of extreme emotion, rather than holding us at arm’s length. It’s other great strength is the performances of the three main actresses, especially Parabo. Paré is good, too, in what is a less flashy and far less sympathetic role, and Barton proves that there was in fact a time when she could act. I’ve always found the ending just slightly over the top – not Paulie’s final act of rebellion against the cruelty of the world, a moment the film is clearly leading up to from the beginning; but the symbolism of the wounded falcon that Paulie has been caring for. The film doesn’t need it to heighten the emotion and it comes across as too much. However, the film as a whole is good enough to overcome it’s slight (albeit poetic) shortcomings.

Posted by Norma Desmond at 6:30 PM