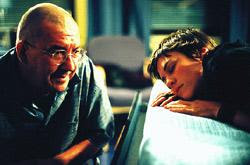 The Barbarian Invasions is a film so delightful and charming that you forgive it for the clichés on which its story hangs. There are a lot of things about the film you’ve probably seen before: a group of old friends reuniting and both celebrating and lamenting the way their lives have changed; the libertarian father and his distant, conservative son who is determined to be nothing like him; the Casanova whose former lovers come together, in this case to give him a proper send off. But, these familiar elements are perhaps a credit, rather than a debit to the film. We feel instantly comfortable in this world, as if we know these people – and that’s how the film gets to you.

The film begins with Rémy (Girard), a college professor on his deathbed. We are made immediately to understand that he’s had a… colourful love life as we watch his latest lover berate him for his history of infidelity. Rémy knows he doesn’t have much time left and doesn’t bother much in the way of an apology. He knows who he is and what he’s done, and he’s made peace with it even if she hasn’t. As the film progresses, his ex-wife, two of his former lovers and a couple of his lifelong friends will join him to spend his final days in reminiscence. Also on hand, albeit reluctantly, is his son Sébastian (Rousseau). Sébastian, who has always resented Rémy’s laisser-faire attitude towards relationships is determined to be different from his father, is determined, in fact, to have nothing to do with his father until some intervention on the part of his mother. Sébastian is shocked when he arrives at the hospital and the film is, at least in part, a condemnation of the Canadian health care system, which is presented here as overburdened and unorganized.

Sébastian goes about trying to make Rémy more comfortable, first by bribing someone at the hospital so that he can move Rémy to a floor that has been left entirely vacant after renovations, and then by bribing some of Rémy’s students into visiting him, making him believe that he’s made an impact on their lives. Sébastian does these things less out of love for his father than out of a need to do something, anything, to control this situation which leaves him feeling so powerless. He further takes control by bypassing traditional medicine, which has lost its effect on Rémy, to find something to ease his pain. A nurse suggests heroin, which Sébastian procures through Nathalie (Croze), the daughter of Rémy’s friend/ex-lover. Croze is wonderful as Nathalie, warning Sébastian from the outset that he shouldn’t trust a heroin addict to be reliable (a point she later proves) and later shooting up with Rémy.

This is a very conversational film, which is part of its charm because these people are so good at talking. They talk about art and politics, about love and sex, and they do so in such a way that you believe that these people have been drifting in and out of each other’s lives for decades. There are stories told in the film that seem to have nothing to do with the narrative – one friend tells of a meeting with an ex-girlfriend, Rémy tells a story about visiting China and attempting to flirt with a beautiful woman by praising the Communist government, only to discover that that system has led to much suffering on her part – but which nevertheless fit so well with the film as a whole. This is a film that not only acknowledges that its characters have thoughts and ideas and read books, but pauses to listen to them talk these things out.

The performances in the film are excellent across the board, especially those of Girard, as the dying man coming to terms with a life lived to its fullest, and Croze, as the damaged woman hurtling towards her own destructive end. The film ends on a note that is ambiguous, but also perhaps appropriate. There’s been some suggestion that Nathalie’s troubles are rooted in part by the hedonistic lifestyle that was enjoyed by her mother (and Rémy, and the others like them) when she was growing up. The film ends with her and Sébastian sharing a moment that you begin anticipating as soon as they meet. To get involved might destroy Sébastian (or, at least, his image of himself), but it might be Nathalie’s salvation. Life can be messy that way, and we don’t know for sure what will develop from this brief encounter. But to end on that note, with this loose end left untied, is the best way for a film like this to conclude because it suggests that life carries on, which is what The Barbarian Invasions has been trying to convey to us from the very beginning.

Posted by Norma Desmond at 6:01 PM