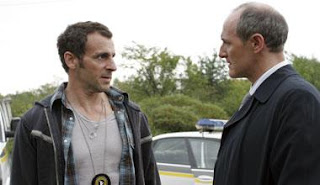 In Bon Cop, Bad Cop, Erik Canuel takes a familiar formula – the buddy cop film – and turns it into something fresh and distinctly Canadian. There’s something for everyone here: a lot of action, a lot of humour, some sex, some hockey, and a light-hearted take on Canadian Anglo-Franco relations. It’s a film that perhaps can’t be completely appreciated unless you are Canadian or have lived in Canada for a significant amount of time, but even if you don’t meet that criteria this is still an accessible film, engaging and well-made.

It begins with a murder. When the victim is tossed from a helicopter and lands on a billboard which straddles the border between Ontario and Quebec, Toronto cop Martin Ward (Feore) and Montreal cop David Broussard (Huard) are assigned to work together until the proper jurisdiction can be determined. It becomes apparent pretty quickly that the murder is hockey related as more victims pile up, each one providing a clue to the next in the form of a tattoo given to the victims by the killer. When the killer finally reveals himself, he explains that he’s out to get the people who have ruined hockey by selling out teams and players to the States. It’s a… very Canadian motivation.

The trope of oil and water partners is no doubt familiar to you, but what makes it special here is the way that it is used to play on the national consciousness. Martin and David aren’t just two cops whose styles differ and who don’t get along; they also represent the age-old rivalry between English and French speaking Canadians, and more specifically the rivalry between Toronto and Montreal. Martin is a staid, by-the-book guy who isn’t cool – which falls in line with Canadians’ general view of Toronto. David, on the other hand, is sexy, kind of dangerous and plays by his own rules, and is definitely cool – which falls in line with Canadians’ general view of Montreal. On the surface we’re presented with two individuals who must learn to get along, but they’re representative of the entire nation.

The film is very funny in a completely Canada-centric way, from the scene at the beginning when David’s superior attempts to translate first from French for Martin’s sake and then from English for David’s, only to discover that he’s the only one in the room who doesn’t have a firm grasp of both languages, to the following exchange between Martin and a Quebequois suspect:

Therrien: What planet are you from?
Martin: Toronto.
Therrien: That explains why I hate your face.

My favourite, however, is the scene following one of the film’s many explosions. David and Martin have just escaped from a burning house that was once a grow-op. Having inhaled a lot of the smoke, both are a little… giddy. When he has to explain to his superior what has happened, Martin (between giggles) assures him that he has a perfectly good “halibi.” This is a movie that totally embraces the idiosyncrasies of Canadian culture and runs with them, which makes it a very rewarding film to watch and makes it easy to understand how this became the highest grossing Canadian film ever in Canada, and why it took home last year’s Genie for Best Picture.

If you’re looking for a realistic police drama, this isn’t the film for you (it’s difficult to effectively resolve a case when you go around blowing up witnesses and suspects and using a would-be victim as bait). This is more or less a satire of the cop movie formula (sort of in the same spirit as the Lethal Weapon movies), hockey fanaticism, and real-life Anglo-Franco relations. It's directed and edited in a crisp, well-paced style, the inter-play between Feore and Huard is great, and it's ultimately just a really fun movie to watch. This is a definite must-see for any Canadian movie fan.

Posted by Norma Desmond at 6:47 PM