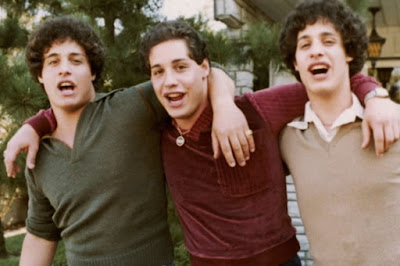 First comes shock and elation, then come the questions and, with them, the anger. Tim Wardle's documentary Three Identical Strangers tells a story so unbelievable, and ultimately so cruel, that even those at the center of it acknowledge that they'd never believe it if they hadn't lived it. Running at a brisk 96 minutes, Three Identical Strangers is intensely focused in its storytelling, which isn't always a good thing as the film hints at certain narrative threads only to quickly move away from them rather than explore them, but what it does explore is so compelling and fascinating that those omissions almost don't matter. Alternately funny and tragic (and sometimes both at the same time), Three Identical Strangers is a deeply engaging documentary and one which is probably most effective if you go into it knowing as little about it as possible so be forewarned that you may not want to read beyond this paragraph if you want to remain unspoiled about some of the story's twists and turns.

In 1980 two young men came face to face, each amazed to find that he was looking at himself. It started when Bobby Shafran showed up for his first day at college and kept being greeted by people who thought he was their friend Eddy Galland. When one of those friends started asking questions and determined that Bobby and Eddy shared the same date of birth and that both were adopted, he brought the two young men face to face, reuniting them after 19 years apart. When the story hit the papers a third man, David Kellman, was shocked to find himself looking at a photo of two men who looked just like himself, and thus a small scale human interest story became a can-you-believe-it viral phenomenon. The three did the talk show circuit, gained entry into Studio 54, had a cameo in Desperately Seeking Susan, and eventually parlayed their semi-fame into a restaurant, the major selling point of which was that they were three brothers.

But while the brothers were awash in elation at their reunion and their brief taste of fame, their parents were feeling a very different emotion: rage. All of the boys had been adopted from the same agency and none of the parents had been informed that the baby they were adopting was a triplet. When the truth comes out and they start asking questions, the plot only thickens. In a meeting with the three sets of parents, the agency claims that information was held back because it would have been difficult to place triplets all together in one home, a point Kellman's father angrily shoots down by declaring that he and his wife would have taken all three and which is further punctured by the revelation made later in the film that the Kellmans, Safrans, and Gallands were specifically sought out because each had already adopted a child from the agency. These weren't potential first time parents whose capacity as parents were unknown; these were three couples that the agency specifically sought out because their parenting capacity was known and because they were known to be willing to adopt further children.

When that meeting concludes and the parents are leaving, one of the fathers realizes that he's forgotten his umbrella and returns to the conference room to retrieve it only to find the people who run the agency popping open a bottle of champagne and celebrating like they've just gotten away with something. It's a moment so cinematic it's hard to believe and yet, by the end, it becomes one of the least unbelievable parts of a story awash in behavior so wildly unethical as to be downright evil. The triplets weren't merely separated after birth; they were studied. Placed in homes of differing economic means, the boys would grow up being visited periodically by people who would take notes, ask them questions, and make them take tests. The men have vague recollections of people coming to their homes and taking video of them playing with their toys and engaging in various activities and they recall becoming increasingly unsettled by these visits as they got older (the visits stopped before they hit adolescence). The parents were told that their children would be part of a study of how children adapt to adoptive homes. In actuality the triplets (and an unknown number of twins) were part of a study about nature, nurture, and heredity and mental health.

The exact purpose of the study remains murky. The people who were involved in it who are both alive and willing to talk to Wardle (and there are only two of them) can only provide pieces of the puzzle; because the study went on for so many years and involved so many people, many of whom were only involved for brief blocks of time, the purpose of the thing sometimes seems like it was a mystery to them, too. To add insult to the grievous injury that was already inflicted on the triplets and the unknown number of people like them, the study was never even published, likely because it became increasingly apparent how unethical and inhumane the whole experiment was. Instead, the project's mastermind shut the study down and, on his death, bequeathed the records to Yale on the condition that they be sealed long enough that everyone involved, including the subjects of the study, would be long dead before they could see the light of day. Which begs the question: what was it all even for?

The story of Three Identical Strangers is fascinating and thought provoking both for the questions it raises and for the way that it undercuts the very notion that the question of "nature vs. nurture" can even truly be answered. Speaking from the side of the study, one of the interviewees declares that the study was a victory for nature, showing that no matter what we do, we are driven by impulses we can't control and don't fully understand and that we are not the masters of our own fate. Yet, speaking from the side of the families (and, it should be noted, coming from someone who has actually met and spent time with the triplets), is an aunt of one of the men who firmly argues that the story proves that nurture is more important than nature and points to the different fates of Eddy, David, and Bobby as proof. By the same token, there is ample evidence throughout the film of how "alike" the three are, of people being astonished at the similarities between them when they were young men, and Bobby in the present day acknowledging that they wanted to be alike. That when they found each other, they wanted to minimize their differences and maximize their similarities, making you wonder how alike they actually were and how much of their behavior was down to pretense, to them behaving in a way that they thought they should in order to affirm their bond.

In the end Three Identical Strangers provides more questions than answers. This is largely because the answers aren't available or aren't available in their entirety, but in some respects it is also because Wardle chooses not to pursue certain avenues of inquiry. It's an odd choice to bring up the fact that Bobby was implicated in a murder by showing a clip of Phil Donahue asking about it and then never bring it up again or provide any details, particularly given the emphasis in the film on the mental health issues displayed by Bobby and his brothers. On the one hand, I imagine that not getting into that matter was a prerequisite for Bobby agreeing to be involved (in a Reddit AMA Wardle states that the film "didn't have time to go into it in detail." but, seeing as it's only a 96 minute movie, I'm not sure I buy that). On the other hand, why bring it up at all if that's the case? Three Identical Strangers is one of the rare films that could stand to be much longer because the story is clearly much bigger than what's being presented here. Despite that, it is nevertheless a terrifically effective and affecting film, and one that you'll want to see before it inevitably becomes a feature film.
Posted by Norma Desmond at 8:00 AM