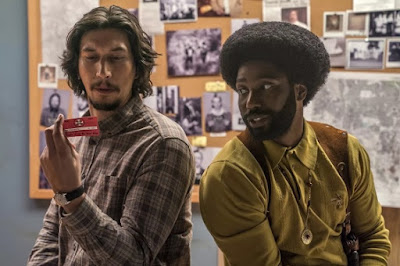 I have something of a love/hate relationship with Spike Lee. I think that he's made two of the greatest feature films to come out in the last thirty years (Do the Right Thing, Malcolm X) and one (25th Hour) that deserves, at least, to be in any conversation of the greatest films to come out in the last thirty years. He's a gifted filmmaker and one who is unafraid to take a clear political stance in his work - a rare virtue in an industry that, more often than not, demands a certain amount of watering down in order to appeal to as broad an audience as possible. My problem with Lee is that, despite his extensive filmmography and 32 years of trying, he has yet to create a decent female character (don't even bring up She's Gotta Have It, which is sometimes cited as Lee's "feminist" film, even though it's anything but). His latest film, BlacKkKlansman, doesn't change that - on reflection I'm pretty sure that there are only 4 women in the entire film with speaking lines and one is just a disembodied voice coming from off-screen - but the rest of it is so good that I can get past that.

As much as any feature film can claim to be a "true story," BlacKkKlansman tells the true story of Ron Stallworth (John David Washington), a black undercover officer with the Colorado Springs police department. Although he's initially assigned to infiltrate a black student union group with supposed ties to the Black Panthers, he's soon shifting away from that and towards the local chapter of the KKK. After seeing a recruiting ad in the paper he decides on a whim to call the number in the ad and, under the guise of being a racist white guy, carries on a conversation with the chapter's President, Walt (Ryan Eggold), who invites him to have a face-to-face meeting so that they can further discuss the possibility of him becoming a card-carrying member of the KKK. There are two problems with this, one of which is obvious and results in Stallworth talking one of his white co-workers into going to the meeting in his stead. The other problem is that, in his zeal and, perhaps, his surprise at actually getting a call back from the KKK, Stallworth unthinkingly gives them his actual name (Washington's line reading, upon the character realizing what he's just done, is a masterclass in understatement).

While Stallworth continues playing the role of "Ron Stallworth, racist white guy" over the phone, including in conversations with "the organization's" (its members never refer to it as the Ku Klux Klan, insisting instead on the nondescript moniker - funny how racists can claim to be so proud while hiding what they're supposedly so proud of) Grand Wizard David Duke (Topher Grace), who insists at one point that he would be able to identify a person of color just by the sound of his or her voice and their pronunciation of certain words; his co-worker, Flip Zimmerman (Adam Driver), takes on the task of playing the role in face-to-face meetings with members of the Klan, quickly finding himself embraced by most, but viewed with suspicion by one of the more radicalized members of the group, Felix (Jasper Paakkonen), who is convinced that "Ron" is Jewish. Felix is also determined to incite the "race war" that he and his cohorts believe to be inevitable and in which they believe they will be victorious, setting his sights on Patrice (Laura Harrier), the President of the black student union with whom Stallworth has begun a relationship - albeit without letting her in on the fact that he's an undercover police officer.

Although set in 1979 the film very much has its mind on the present day, from mutterings about the need to restore "America's greatness" and put "America first," declarations made by people who value their whiteness so highly because it's the only thing they have to offer, to Stallworth's Sergeant warning him that the danger presented by the KKK isn't merely in their specific acts of terror against individuals, but in their efforts to become so entrenched in the establishment that they become the establishment. That might seem like it's a little too on the nose, but in the case of a story like this one Lee's tendency to favor a chainsaw over a scalpel is nothing if not effective. At this moment in history, in the circumstances as they currently are, racism isn't a subject that can be approached gingerly; it needs to be confronted directly and that's what Lee is doing.

In that regard, one of the more interesting aspects of the film is how Lee unfolds the ending. First he provides a Hollywood ending, one which wraps up the main action and delivers the satisfaction of seeing a racist cop who has been tormenting Stallworth get his comeuppance. It's a happy ending too good to be true - and it is. Following that moment of uplift and triumph, Stallworth is then faced with defeat in the form of being ordered not just to discontinue his investigation, but to destroy the file. In effect, he's both won and lost the battle. He's won in the short term by stopping the local KKK from succeeding in their plan of attack, but in the long term he's lost in that the investigation being covered up means that the KKK will be able to regroup and carry on. As the film switches from a fictionalized vision to documentary footage of the Unite the Right Rally in Charlottesville, it's not difficult to draw a line directly from Stallworth's defeat to Neo-Nazis marching through the streets and being defended by the President, who is in turn praised by none other than David Duke. It's an ugly, upsetting ending - but that's the point. History isn't linear; it's circular. That means that when we aren't vigilant, the bad shit that's supposed to be in "the past" has an opportunity to come back with a vengeance. BlacKkKlansman is a reminder to be vigilant delivered in a searing, emotionally stirring, and masterfully crafted film.
Posted by Norma Desmond at 8:00 AM