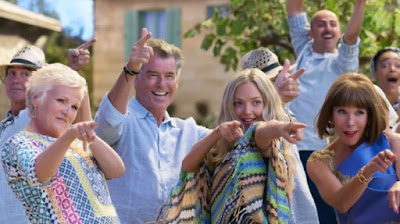 The Mama Mia movies are the sort of works that force you to examine your own taste in art. In a purely objective sense, you're aware that they're not "good" and that, in fact, they don't even really come close to the normal standard of what makes a movie good. They are, if you are being brutally honest with yourself, barely movies at all in any traditional sense. Their narratives are thin as air, existing merely to connect a series of songs to each other, not always accomplishing that in the most elegant of ways. And yet. Isn't the aim of art to stir something in the audience, to touch some emotion and heighten it through the experience of consuming it? If the goal of the work is to bring the audience joy and it succeeds in doing so then isn't it, by definition, a "success" even if it does so in a fashion that might generously be described as "clumsy." This is all a round about way of saying that Mama Mia! Here We Go Again is as terrible and wonderful as the first film and I loved every minute of it.

I'm just going to get this out of the way: Yes, Meryl is dead. I mean, not Meryl Meryl; Donna Meryl, star of the first film, has died between the end of that one and the beginning of this one. I'm addressing this first because the marketing for the film is so vague, suggesting the possibility that Donna is dead in this one even as the promotional material makes Streep as prominent as if she continued to be the main character. Donna is dead and the whole story is built around the fact of her death, so this really isn't a spoiler, and Streep's presence in the film's marketing isn't really (or, rather, isn't entirely) a shallow marketing ploy. Her absence looms over Here We Go Again, whose present day characters remain deep in mourning for her, and when she finally does appear in the film for a brief scene in which she shares a duet of "My Love, My Life" with daughter Sophie (Amanda Seyfried), it becomes the emotional cornerstone of the entire movie. You have to hand it to Streep. She can show up for less than 5 minutes, completely devastate you emotionally, and in doing so elevate the whole thing to something more than it was before.

In the wake of Donna's death, Sophie has taken over responsibility for the hotel and is in the midst of preparing for its grand re-opening, albeit in the absence of some of the most important people in her life: Sky (Dominic Cooper) is in New York, building his own career, and their relationship is teetering over the edge because she wants to stay in Greece and carry on her mother's legacy, and he wants her to join him in New York; Harry (Colin Firth) will be unable to attend due to a business deal taking place in Japan; and Bill (Stelan Skarsgard) will be receiving an award in Sweden the night of the opening. On hand, however, are Sam (Pierce Brosnan, whose signing ability has not improved whatsoever since the first film), and Donna's best friends Tanya (Christine Baranski) and Rosie (Julie Walters), to provide Sophie with the emotional support she needs as everything starts to go wrong and the re-opening looks to be a disaster.

Playing out along-side the present day story (which isn't present-day as in our present-day; it takes place 5 years after the first film, which was set in 1999) is the story of how Donna (Lily James) came to Greece and into possession of the hotel in the first place. Basically, forget just about everything you remember about the backstory presented in the first film, because I'm pretty sure that it only partially aligns with the backstory provided here, which finds Donna, Rosie (Alexa Davies), and Tanya (Jessica Keenan Wynn, whose casting as a younger version of Baranski is proof that casting directors deserve to be recognized for their work by organizations like AMPAS) graduating from Oxford and Donna taking off to explore the world, encountering Harry (Hugh Skinner), Bill (Josh Dylan), and Sam (Jeremy Irvine) along the way. Each man, in his own way, falls for her and the film is refreshingly non-judgmental about the fact that she has sex with all of them in the span of a few weeks, choosing to emphasize throughout how her free spirit and joie de vivre drawn people in, both as romantic partners and friends, and create lifelong bonds. Though James doesn't physically resemble Streep, she does do an excellent job at embodying the qualities that make the character so beloved by those who know her and the performance is quite winning.

But, if you don't like ABBA to begin with, none of the film's charms are likely to win you over. Like its predecessor, Here We Go Again is one of those films where you basically know whether or not you're going to enjoy it before you even see it. I liked it a lot, but I can fully understand why it wouldn't be someone else's cup of tea. It is, as I said, barely a movie at all - though, weirdly, I came away from it thinking that, on a narrative level, it is actually a stronger film than the first, which is maybe the result of its songs being somewhat less well-known. Unlike the original, which had to create a story that could connect the narratives of ABBA's biggest hits (but gave up when it came to "Waterloo" and relegated it to the credits), Here We Go Again may have had the luxury of being able to fit songs to the story rather than the other way around. Except for Fernando, which is shoehorned in to simultaneously give Cher something to sing and provide a backstory/not really a backstory to the character played by Andy Garcia. And you know what? That doesn't even matter because it's so much fun. Here we go again, indeed.
Posted by Norma Desmond at 1:38 PM

Oh dear...the ads here in Japan don't hint anything at Donna's death so that was a huge spoiler....However, I'm still probably going to see this film because...I loved the first one and want more!

And too bad about Pierce! I hoped he would have had singing lessons in the years between the films.

Aw, sorry. Over here the "Is Donna Dead or Isn't She" question was the major talking point leading up to the release of the movie because of how the ads were cut.

The good thing about Pierce's singing is that he only does a little bit of it here.