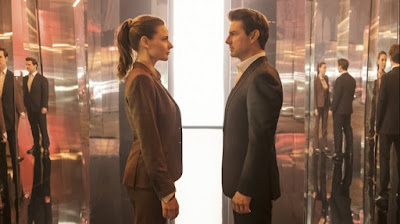 Rogue Nation, the previous entry in the Mission: Impossible series, is an awesome movie. It's so awesome, in fact, that a series which has softly rebooted itself with each previous outing - shedding writers, directors, styles, and cast members along the way, retaining only Tom Cruise and Ving Rhames all the way through - allows its newest entry to be a direct continuation of the previous one. Not only do Rogue Nation and Fallout share a writer/director (Christopher McQuarrie), they also share a villain in Sean Harris' Solomon Lane, and a figure who is somewhere in between an antagonist and a friend in Ilsa Faust (Rebecca Ferguson), the former MI6 agent who now exists in something resembling limbo - a woman without a country and without an agency. In Fallout Lane's terrorist group The Syndicate has rebranded itself as The Apostles and the mission, should Ethan Hunt (Cruise), choose to accept it is to stop them from selling three plutonium cores to the mysterious John Lark, who intends to use them "cleanse" the world by ushering in the great suffering which must precede the great peace.

Because Ethan and his team lost the plutonium in the first place (a result of Ethan's inability to sacrifice someone he cares about for the sake of the mission), CIA Director Erica Sloane (Angela Bassett, not given enough to do here, but perhaps that will be rectified in the next film) assigns one of her own agents - August Walker (Henry Cavill) - to accompany Ethan on the mission to find Lark and retrieve the plutonium and gives him carte blanche to get the job done in whatever way proves necessary, even if it means killing Ethan. This results in a situation where sometimes Ethan and Walker are working together to accomplish something (such as taking on the man who is believed to be Lark and won't be taken in without a fight), sometimes Walker is actively working against Ethan and trying to either slow him down or push him out entirely (messing with someone in the midst of a HALO jump is probably not the best idea), and there will come a plot twist that you'll see coming from a mile away but which works anyway because the film's breakneck pace doesn't allow for much of an opportunity to nitpick while you're watching it.

Fallout is fairly relentless in its action, unfolding elaborate sequence after elaborate sequence. There's the aforementioned HALO jump, around which a lot of the press for the film has been built as evidence of Cruise's absolute commitment to doing his own stuntwork (which is definitely impressive, but let's pause for a moment and give some of that praise to the camera operator, who also had to do the HALO jump, not die in the process, and get the shot), but there's also a long chase sequence which finds Cruise risking life and limb on a motorcycle , and an even longer sequence which finds Ethan and John Lark doing battle via two helicopters. In an age when CGI has rendered most action sequences meaningless and quick cut editing has rendered many incomprehensible, Fallout is the rare action film that almost feels too real. The craftsmanship of a film like Fallout should be "exhibit A" in any argument about why, instead of introducing the hilariously vague "Outstanding Achievement in Popular Film," the Oscars should have instead introduced a category to honor stunt teams.

McQuarrie is the first returning director in the series (which started with Brian De Palma then passed to John Woo, J.J. Abrams, and Brad Bird) and the success of Fallout could find him back for a third, which would be a great thing since not only does he keep the film moving at such speed that you don't notice that it runs to nearly two and a half hours, he also brings a visual flair to the film that makes some of its quietest moments feel dynamic and interesting. As a writer McQuarrie also works to give the audience greater insight into Ethan's interior life, not only making his relationships with the people around him (from his friend/co-workers Luther and Benji, played by Ving Rhames and Simon Pegg, to potential love interest Isla and ex-wife Julia, played by Michelle Monaghan) central to the actual plot, but also using dream sequences and a fantasy sequence to further investigate Ethan's emotional state as a result of his work. The Mission: Impossible series has never been one that's been renowned for its character work, but Fallout aims to go just a little bit deeper and largely succeeds, unwilling to be nothing more than an action movie that thrills you in the moment and allows you to forget about it immediately after. It's a great summer movie that gives you pretty much everything, but still manages to leave you wanting even more.
Posted by Norma Desmond at 12:39 PM

This is indeed the summer blockbuster with everything. Couldn't agree with you more on that. And I'd be all for a stunt Oscar over this new "popular film" thing, whatever they're calling it. You're also right about the pace helping to keep us from nit-picking it. It just keeps throwing things at us, so we've no time!