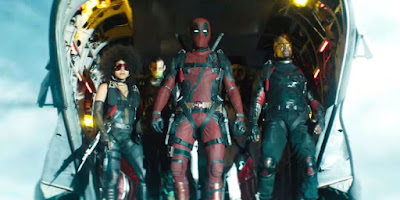 Part of the charm of Deadpool was its inherent shabbiness. Made on a shoestring budget (at least by the standards of superhero/action movies), Deadpool turned its discount elements into a strength by making it part of the joke. Deadpool 2 has the benefit of having about twice the budget as its predecessor, which gives it a lot more flash in terms of its action pieces, but it still manages to maintain that industrial and minimalist aesthetic of the first. It adheres to the principle of movie sequels to "do the same thing, but more," but it manages to stay relatively true to its roots at the same time, which is surely no easy feat. Deadpool 2 is the equal to its original, better in certain respects but not quite as good in others, and certainly worth the price of admission.

Deadpool 2 finds its protagonist (Canada's sweetheart, Ryan Reynolds) in crisis. Having failed to clean up all of the loose ends on his latest mission, Wade Wilson/Deadpool can only watch when a man he failed to kill earlier shows up at his home and kills his girlfriend, Vanessa (Morena Baccarin). This is the catalyst of the story, but it's also one of Deadpool 2's most glaring flaws. Honestly, when Vanessa was killed within the first 15 minutes of the movie, I actually sighed and thought, "Did they seriously just fridge Vanessa?" (this feeling of disappointment was only exacerbated later when the film does the same thing to Cable's wife and daughter). For anyone who may not know, "fridging" is when a superhero's significant other is killed so that the hero can feel grief. It's a trope that essentially reduces the female character in question to something that exists solely to move the male character forward, and makes violence against a women a matter of how that violence makes men feel. That's what Deadpool 2 does. It kills Vanessa in order to provide Wade with an existential crisis that will further his character development, and in doing so it makes Vanessa disposable, something that matters only because of how much she matters to Wade.

My annoyance at this turn of events is compounded by the fact that writers Rhett Reese and Paul Wernick (Reynolds is also credited as one of the writers) have claimed that they had no idea what fridging was and didn't realize that the film could be seen as engaging in it, which seems entirely disingenuous to me given that I know about the trope and I know where it originated and I'm not even a comic book reader. Even assuming that they really didn't know about it, the fact that they could engage in it twice without even thinking about it is a good argument for the need for films to have greater diversity behind the scenes, if only so that there's someone involved who can see what everyone else doesn't and say, "Hey, that thing you're about to do? It sucks and you're going to get a lot of grief for it." I don't disagree with Reese and Wernick's argument that Wade needed to be unfettered for the sake of the narrative, but there are ways that Vanessa could have been removed from his life without resorting to the laziest cliche possible. The same could be said for the wife and daughter of Cable (Josh Brolin), the time traveler determined to assassinate someone in the present day in order to prevent the horrible future from coming to pass. When filmmakers are criticized for the thoughtless way that they treat characters who don't look like them (something which happens increasingly often), they tend to act as though their hands were somehow tied, but storytelling is a creative process. You make choices when you engage in it and even if the work is an adaptation of something else, you can make the story whatever you want it to be. This seems particularly true for a property like Deadpool, which openly delights in the ways that it breaks all the so-called rules.

Yet, while I think that the act that kicks off the narrative is fundamentally ill-conceived, I still largely enjoyed Deadpool 2, in which the title character, having lost Vanessa and his will to live, discovers a sense of purpose when he takes the young mutant Firefist (Julian Dennison) under his wing and learns that Cable is determined to kill him. In order to save Firefist from Cable and prevent him from turning into the force of evil that Cable has traveled back in time to stop, Deadpool assembles an elite team which is quickly (and hilariously) reduced to just himself and Domino (Zazie Beetz), a mutant whose power is being lucky, which might not sound like much of an ability, particularly in comparison to those of other mutants, but proves to be incredibly helpful when seen in action. Domino is pretty awesome, so much so that her presence very nearly makes up for what the film does to Vanessa, and I would fully get behind a Domino spin-off even though I know that the only character actually likely to get their own spin-off film is Cable.

Brolin, having an excellent year Marvel movie-wise, is a great addition to the Deadpool team, his gruff underplaying a perfect compliment to Reynolds' ironic fourth-wall breaking. Reynolds is still the star of the movie, doing more to set the project's tone than any other of its other elements, but things come together in a way that suggest a potential shift away from Deadpool as the sole protagonist and towards something resembling an ensemble piece about the team he's put together. Although the focus on Deadpool himself has worked to the tune of over a half-billion dollars and counting, I'm also not sure that there's much farther left to go on the strength of that character alone. Adding characters like Cable and Domino to the mix opens things up in ways that could take the series in interesting new directions and help ensure that Deadpool's schtick (entertaining though it has been so far) doesn't wear out its welcome.
Posted by Norma Desmond at 1:03 PM