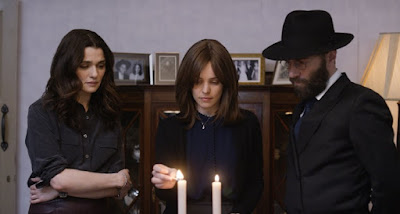 The promotional materials for Disobedience heavily emphasize the relationship between the characters played by Rachel Weisz and Rachel McAdams. While that relationship is most certainly a key element of the story, it isn't really what the film is about, but I suppose it's easier to sell a tale of forbidden love than it is a story about people living in a strict religious community being faced with the choice of adhering to the limiting confines of the religions teachings or being expelled entirely. Adapted from the novel of the same name by Naomi Alderman and directed by Sebastian Lelio (whose A Fantastic Woman won this year's Best Foreign Language Film Oscar), Disobedience is a carefully observed film about the struggle between the desire to be and the desire to belong and features great performances by its two Rachels.

Disobedience begins as a story of a prodigal child returning home, as Ronit (Weisz), a photographer living in New York, is called back to London, where her father, an Orthodox rabbi, has died. They had been estranged since Ronit's adolescence, the split so complete that his obituary states that he left no children at all, and her return is not welcomed by the community she has left behind and which held her father in such high esteem. Seemingly the only people happy to see her are her aunt (the sister of her late mother, who marvels at how she's become the picture of her mother), and her childhood friends Esti (McAdams) and Dovid (Alessandro Nivola), whom Ronit is surprised to learn are now married to each other. Later she'll learn that her father was instrumental in making the match, extolling the virtues of Dovid to Esti and convincing her that he'd be the ideal man for her to build a life with.

Though it's never openly addressed in the film, his motives for engineering the match are suspect. Is it an act of kindness, a matter of him seeking to secure the happiness of Dovid, his religious apprentice? Or is it an act of selfishness, a means of containing Esti through marriage in order to prevent a repetition of the past? As the film unfolds, we learn that one of the reasons for the rift between Ronit and her father was her relationship with Esti, which became sexual in their adolescence. While Ronit opted to escape entirely rather than bend to fit the community's restricted view of what women can be, Esti is much more devout and has tried to conform to what she's been told she has to be, though when Ronit asks about her marriage and whether she still "only facies women," Esti confirms that that remains the case. She'll also confess that, contrary to what Ronit believed, it wasn't Dovid who sent word to New York that her father had died, it was her.

If that seems like playing with fire, it is. Though Esti is sort of standoffish with Ronit when she first returns, it quickly becomes clear that her desire for her is as compelling as ever, prompting her to take risks that put in jeopardy both her place in the community (which includes her job as a teacher at a private school) and Dovid's ascension to the place in the community previously occupied by Ronit's father. Esti is a pious woman who, save for her adolescent indiscretion with Ronit, has always done what she's told is expected of her and has strictly adhered to the rules of her community. She has a place in her community and that provides her with a feeling of security that she fears losing, and though she knows that her desire for Ronit has the potential to tear that foundation out from under her, she just can't seem to help herself once Ronit comes back into her orbit.

But despite how much of the story centers around Ronit and Esti and their push-pull dynamic which finds them drawn together, forced apart, and drawn together again, Disobedience isn't really about whether or not they end up together and the "disobedience" of the title isn't solely about how they have to break the rules in order to be together, whether in the long run or only briefly. As the film reaches its conclusion, the concept of "disobedience" takes on a broader meaning that applies to more than just Ronit and Esti's relationship. The "rules" of the community are about more than just sexuality; they guide every aspect of life and leave no margin for error and make even those who have the benefit of existing at the top of the hierarchy (like Dovid) feel suffocated by what's demanded of them.

The three performances at the center of all this are great. McAdams and Nivola both find a way to express the quiet torment of living a life that, on some level, they each know is a fragile facade, an image held together by their determination to live in the way that's expected of them by the rest of their community. It doesn't take much to tear it apart completely because in certain ways Esti has always been restless and Dovid has always been frustrated, it's just taken Ronit's arrival to cast a light on the vulnerabilities of their marriage. In this respect Ronit is an agent of chaos, turning this marriage upside down and setting the community abuzz, but as played by Weisz she doesn't mean to be nor does she want to be. In her own way Ronit is as vulnerable as that marriage: cast out, made to feel that she doesn't even exist unless she exists on the terms the community offers, standing alone against the judgment of the many, unable to turn the other cheek when faced with their insults. Although the effect of her return is sort of like that of a hurricane, the character isn't particularly flashy and Weisz's performance, like those of McAdams and Nivola, is largely a quiet one. Disobedience isn't a film of large emotions and big scenes, but a slow burn of underlying tensions. It may actually be too slow, really, but I think that it ultimately works as a thoughtful character study.
Posted by Norma Desmond at 8:00 AM