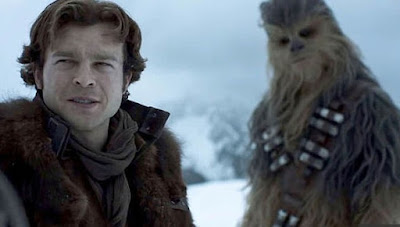 There are two things that can't be denied about Solo: A Star Wars Story. The first is that it had a troubled production, with original directors Phil Lord and Christopher Miller (directors of the Jump Street movies and The LEGO Movie) being fired more than half-way through production and replaced by Ron Howard, prompting much speculation about the salvageability of the project. The second is that with an estimated $103 million Memorial Day weekend opening, it's considered something of a flop (by the standards of Star Wars movies, at any rate). That's a lot of negativity for one movie to overcome, but you know what? Solo is a pretty decent movie. It's a goofy adventure/heist movie that, though it has some flaws, is at worst a mid-tier Star Wars movie. Seriously: give it a chance.

Set some ten years before Star Wars, Solo revisits its iconic rogue (Aldren Ehrenreich) as a young man trying to escape the slums of Corellia, where he is indentured to the gang leader Lady Proxima. He dreams of escaping Corellia and becoming a pilot and has a plan to flee with Qi'ra (Emilia Clarke), but the two end up separated and she gets left behind while he joins the Imperial Navy as a flight cadet. Years later, having been busted down to infantry (for being mouthy), Han stumbles across a gang of thieves who are posing as Imperial soldiers and tries to blackmail his way in. They turn the tables on him but when he comes back with a new Wookie friend in tow, they decide to give him a chance (or, rather, they decide to give Chewbacca a chance, but can't take him without taking Han). The gang is led by Tobias Beckett (Woody Harrelson), who works for the gangster Dryden Vos (Paul Bettany), and when they lose the shipment Vos has hired Beckett to retrieve, they're tasked with completing another, more dangerous mission to steal coaxium from the mines of Kessel. To accomplish this they're going to need a fast ship, which leads them to Lando Calrissian (Donald Glover) and the Millennium Falcon.

All told, Solo probably isn't "essential" viewing unless you're a fanboy (or girl), a completionist, or you simply want to see things referred to in the original trilogy such as Han's legendary Kessel run or Lando losing the Falcon to Han in a card game; but it's still pretty fun. Much like Rogue One, the first of the stand alone anthology films, which had its own production troubles leading to extensive reshoots, the final product hides these behind the scenes problems well. Except for one scene which includes a signature cameo from Clint Howard, I really couldn't tell you which scenes came from Ron Howard and which ones came from Phil Lord and Christopher Miller - which is pretty incredible considering one of the reasons Lord and Miller were reportedly let go was because their work didn't fit the overall "tone" of the Star Wars movies. All of the stories surrounding the collapse of Lord/Miller's production would suggest that the film would be destined to turn out a mess, cobbled together by multiple directors and competing visions (and, allegedly, a leading performance that required the intervention of an acting coach), but the problems don't make it onto the screen. The story is pretty straightforward (so much so that it contains some recognizable cliches, such as the character who warns the protagonist not to trust anyone and who, in turn, betrays the protagonist's trust), the characters are pretty consistent from one scene to the next, and everything fits together seamlessly.

This isn't to say that everything turns out great. When your most fully fleshed out and interesting female character is a robot (a delightful shit-stirrer voiced by Phoebe Waller-Bridge who advocates equal rights for robots and laments that, while Lando is clearly in love with her, it simply cannot be), there's a problem, though the film does have the potential for another in the form of a character played by Thandie Newton, who dies early and in self-sacrifice and whose absence through the rest of the film left me wondering how things might have been if she and Harrelson had switched roles. That isn't a knock on Harrelson, who is more than fine in the role; it's just an acknowledgment of the fact that actors get to play this type of role (the gruff mentor) all the time while actresses have had far fewer opportunities, and the switch might have made for a more interesting, fresher dynamic.

There are also some issues in terms of the look of the film, which is pretty dim during its first half but begins to lighten up in the second. That said, even with its flaws, Solo ultimately delivers a decently entertaining adventure. Ehrenreich isn't Harrison Ford but, then again, he isn't supposed to be. This is supposed to be about Han before he has the experiences that turn him into an intergalactic Rick Blaine, uninterested in sticking his neck out for anyone. This Han is a little more quick to help a person out, though the two versions of the character are bridged by the cockiness that is so much a part of Han's charm. Ehrenreich is ultimately outshone by Glover, whose sly, impish Lando is the highlight of the film and leaves one hoping that one of the upcoming anthology movies will center on him. I mean, if Boba Fett can have one, then surely Lando, played by charisma machine Glover, should get one, too, right? I'll wait patiently.
Posted by Norma Desmond at 8:00 AM