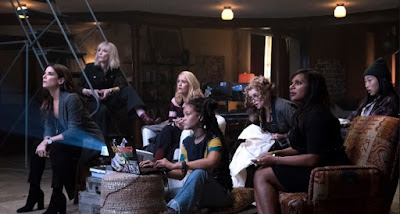 "Why do you need to do this?" "Because it's what I'm good at." Sometimes that's all the justification you need. Did the world need another Ocean's movie? Probably not. I mean, one could reasonably argue that there didn't really need to be three in the first place. But movies like Ocean's 8 don't exist to address a need any more than the candy available at the concession does. These things exist because sometimes you just want a treat, something that has no nutritional value but gives you a bit of a sugar rush. Ocean's 8 is a lot of fun. It might not be striving for greatness, but it delivers pretty much exactly what it promises and its mix of charismatic stars, glamour, comedy and adventure makes for a perfect summer entertainment.

If you've seen Ocean's 11, then you already know how Ocean's 8 kicks off. I mean that very literally as, just like the first, it begins with someone whose first name starts with "D" (Debbie, in this case, played by Sandra Bullock) and whose surname is Ocean being interviewed by a parole board. Like her brother, Debbie talks a good game about turning a new leaf and gets herself released from prison, but she's already got a plan for her next score (she's also got a secondary plan for a bit of revenge). Immediately upon being released, and after successfully completing a couple of small, short-term scams, she makes her way back to her former partner, Lou (Cate Blanchett), and makes her pitch for their next job: to steal a $150 million necklace during the Met Gala. Having spent years thinking about the plan and honing it down to its smallest details, Debbie has determined that they'll need a team of seven to pull it off, so she and Lou get to recruiting and bring aboard Amita (Mindy Kaling), a jewelry maker, and Tammy (Sarah Paulson), a fence, both of whom they already know; Rose Weil (Helena Bonham Carter), a fashion designer on the brink of bankruptcy and jail; Constance (Awkwafina), a street hustler/pickpocket; and Nine Ball (Rihanna), a hacker.

With the team in place they begin unfolding a plan which involves positioning Rose to be the designer of choice of Daphne Kluger (Anne Hathaway), the celebrity co-host of the Gala, and using that as a means of getting the necklace, which is kept deep in Cartier's vault, into play so that it will be present at the Gala. As in all heist movies there's an elaborate plan, a moment when things go unexpectedly sideways, and several moments when it appears that things are going sideways that turn out to have been part of the plan all along. The film's denouement also reveals that in addition to the ostensible plan (stealing the necklace) and the secondary plan (revenge) there was also a secret third plan which, in hindsight, I can see that the film totally set up but which I didn't see coming as I was watching the movie.

In a some respects the story of Ocean's 8 is pretty perfunctory (I mean, it does pretty much just lift the opening of Ocean's 11) and while I did enjoy it, I also have to admit that it is somewhat lacking in "zip" in its middle section and features way more cameos (several of them kind of clunky) than it needs. Still, by leading with its star power, the film becomes enough of a success to make it one of those movies that you can see yourself stopping to watch whenever you find it playing on TV or putting on just for the hell of it because it's a good, easy watch. Bullock was made for this kind of role, in which every line is said with just the hint of a smile, like a playful little "gotcha," and Blanchett is flawless as the behind the scenes player who makes sure that things don't fall too far out of place as the plan is unfolding. The first MVP of the film is Hathaway, who gets to go a bit broad playing a seemingly vapid celebrity/patsy, and whose presence continuously brings the energy level back up whenever it starts to sink.

The second MVP is costume designer Sarah Edwards, who creates distinctive "looks" for each of the women on screen, almost all of which are fantastic. I'd see the movie a second time just to get another look at the clothes, to be honest (I am also fascinated by the sheer amount of jewelry that Blanchett's character wears from scene to scene, which should be way too much but somehow works). I don't know that Ocean's 8 is going to be one of the best movies of the summer (mostly because I'm not even sure at this point when the "summer" movie season starts, given that Infinity War came out all the way back in April), but I think it's most certainly going to be one of the best looking. If you were disinclined to be generous, you might say that Ocean's 8 relies on superficial qualities (its starts, its costumes) while being a bit lax in the story and character development departments. I'd be hard pressed to argue that point, but I would also be quick to point out that its superficial qualities are pretty compelling all on their own. I've never bothered to see Ocean's 12 or 13, but I'll be in line to see Ocean's 9.
Posted by Norma Desmond at 7:08 PM

I enjoyed it, but didn't love it. It's fun, as you say, but I wanted the characters to be more developed rather just thrown headfirst into this elaborate scheme. That's something Clooney's 11 & 12 excelled at. I'll see 9, if they make it, but I probably won't be in any big rush when it comes out.

Yeah, the character development was a bit lacking for sure.