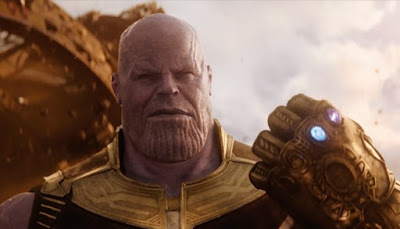 The success of Avengers: Infinity War - both creatively and financially - is a testament to the patience of Marvel Studios and Disney and the vision of the people behind it, particularly producer Kevin Feige, who has spent a decade bringing it together piece by piece. While seemingly every other movie studio has rushed to have (rather than build) shared universes that could double as money printers, Marvel has shown that there's no substitute for doing it one good movie at a time. Infinity War is the culmination of a decade of careful planning and 18 movies that have, save for a lesser entry here and there, mostly run the gamut from good to great. Since the film has already made over $500 million domestically and over $1 billion worldwide, I'm going to assume that spoilers don't matter in the discussion below. Consider yourself warned.

At the center of the story is Thanos (Josh Brolin), whose quest to collect all six of the Infinity Stones has been lightly threaded through several of the previous Marvel movies. Having acquired the Power Stone off-screen and the Space Stone in the film's opening minutes (which, bummer, means that the Asgardians rescued at the end of Thor: Ragnarok are mostly now dead), he sends his subordinates to Earth to retrieve the two stones located there - the Time Stone possessed by Doctor Strange (Benedict Cumberbatch) and the Mind Stone possessed by Vision (Paul Bettany) - while he remains in space, hunting the Reality Stone, which is known to be in the possession of the Collector (Benicio del Toro), and the Soul Stone, whose location is unknown except to Gamora (Zoe Saldana), whom Thanos considers a daughter, having raised her after orphaning her by killing half the population of her planet. Once he has the four remaining stones, his intention is to kill half the population of the whole universe.

The narrative of Infinity War plays out in Game of Thrones fashion, sprawling over several locations with characters grouped together in their own sections of the story. Doctor Strange finds himself teamed up with Tony Stark (Robert Downey, Jr.), Peter Parker (Tom Holland) and, eventually, several of the Guardians of the Galaxy - Peter Quill (Chris Pratt), Drax (Dave Bautista), and Mantis (Pom Klementieff) - on Thanos' home planet Titan; Vision and Wanda Maximoff (Elizabeth Olsen) are rescued in Scotland by Steve Rogers (Chris Evans), Natasha Romanoff (Scarlett Johnasson) and Sam Wilson (Anthony Mackie) and then spirited to Wakanda along with James Rhodes (Don Cheadle) and Bruce Banner (Mark Ruffalo) in the hope that the technology in Wakanda can separate Vision from the Mind Stone without destroying him. This draws Thanos' minions to Wakanda, where T'Challa (Chadwick Boseman) and the Wakandans, plus Bucky Barnes (Sebastian Stan), are on hand to help keep them at bay and away from the Mind Stone; and Thor (Chris Hemsworth) goes on a quest with Rocket (Bradley Cooper) and troubled teen Groot (Vin Diesel) to retrieve a weapon powerful enough to kill Thanos even with several of the stones in his possession.

There's a lot going on in Infinity War, which is relentless in its action and jam packed with characters (the only heroes missing are Hawkeye, Ant-Man, and Valkyrie), and it's largely entertaining as characters whose paths have never crossed before find themselves thrown together and have to find a way to work with each other to solve the shared problem. As written by Christopher Markus and Stephen McFeely (who also wrote the Captain America films), Infinity War avoids two of the biggest potential problems for its story by juggling all of the storylines and all of the characters without making it feel like any are being short-changed, and by moving so swiftly that tropes that get used multiple times don't feel too repetitious (I'm not sure how many characters got a moment of "self-sacrifice," but I'm pretty sure that if I'd taken a drink each time it happened I'd have been pretty buzzed by the end of the movie). It also manages to present its villain in a way that makes him more than a cardboard bad guy whose goal can be summed up as domination for the sake of domination. Thanos' motivation is one that is clear and, in a way, understandable. He sees a universe in which people are suffering because there aren't enough resources to meet all of their needs. His solution to that problem (kill half the people) is evil and rooted in egotism (he knows what's best for everyone and is deaf to pleas that his plan isn't what others want), but it also has its own understandable logic.

Having said all that, Infinity War ultimately fails at what should arguably be the most important thing: for all the pathos and sacrifice and emotion of it, it has no real weight. Some of the characters who die through the course of the film may be well and truly dead - I could see how characters like Heimdall (Idris Elba), Loki (Tom Hiddleston), who die in early in the story, and Vision, who spends basically the entire movie on the verge of death, could be seen as having served their purpose to the overall narrative and be gone for good - but Thanos' proclamation that there will be no resurrections this times seems laughable in the face of which characters die as a result of the "snap." Bucky, Wanda, and Sam? Sure, I could buy that those deaths are permanent, but the other characters to fall to the snap are those who we know are going to somehow come back because their series aren't finished yet. There's not a chance in hell that the Guardians of the Galaxy (who all die except for Rocket), T'Challa, Peter Parker, or Doctor Strange aren't coming back and that sucks all of the tension out of the film's finale so that instead of feeling stunned or sad or anything, you're really just left with the coldly intellectual question of how Marvel is going to contrive to reverse these fates. It's a meaningless ending, but maybe next year's sequel will succeed where this one fails.
Posted by Norma Desmond at 8:00 AM

Just wondering if your misspelling in the title of this entry has anything to do with how you feel about the film? ;-)

Even though I agree with you that they will come back, I was sad when characters disappeared.

Ha, no, just inattention on my part.