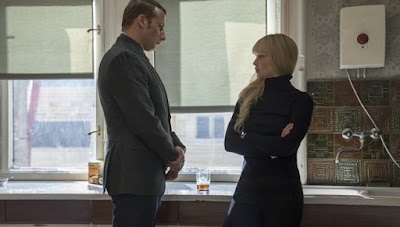 Red Sparrow is a film that dares to ask: how many rape scenes is too many? If you've heard the term "male gaze" but aren't sure exactly what it means and would like to see a visual example, then this is the movie for you. Ostensibly a spy thriller, albeit of the most predictable, slow-moving, and needlessly convoluted kind, Red Sparrow is really just a perfunctory means of festishizing violence towards women, even though it seems to see itself as an empowerment narrative. It's a 140 minutes which would be reduced to about 15 if you excised all the scenes demonstrating, suggesting, or referencing sexual assault, coercion, harassment, or what the film characterizes as prostitution but which more closely resembles slavery. Hollywood: you can do better than this. You can do better with respect to films and you can do better by someone as talented as Jennifer Lawrence.

Adapted by Justin Haythe from the novel of the same name by Jason Matthews, Red Sparrow tells two intersecting stories. One is about Nate Nash (Joel Edgerton), a CIA agent posted in Moscow who has to be hastily spirited back to the US after blowing his cover by providing a distraction that allows his source, code named "Marble," to escape following a meeting. The other is about Dominika Egorova (Jennifer Lawrence), a ballerina whose career is ended after her leg breaks in horrific fashion during a performance. Now without a means of supporting her disabled mother (Joely Richardson), she is preyed upon by her uncle, Ivan (Matthias Schoenaerts), an SVR director who recruits her to be a honey pot to lure a target into a compromised position. In the aftermath of that operation she's given the option of becoming a "Red Sparrow," a spy trained to use sex to gain the trust of targets, or being executed as a witness to the fallout of her unofficial first operation. Dominika accepts this devil's bargain and after a brief period of training is assigned to Budapest and tasked with making contact with Nash, who has now set up shop there in the hope of reestablishing contact with Marble.

A lot of the plot turns from this point are pretty much as expected. Nash, who has actually been working as a spy for some time, isn't fooled by the novice who follows him around for a day before trying to engineer a "chance" meeting with him and switches from being the SVR's target to trying to flip Dominika and turn her into an asset for the CIA. She appears to begin working with the CIA, then the film suggests that that was just a ploy, then it turns out that she was playing everyone because of course a person who has had, like, six weeks of training and is on their first mission is going to be able to outmaneuver a bunch of people on both sides who have at least a decade more experience, and of course she's able to anticipate how things are going to shake out and plant pieces of information along the way that will support her story in the end. And, in accordance with Roger Ebert's law of economy of characters, of course Marble will end up being a character that we've already met, whose identity Dominika will learn, which will allow her to pull off her big con (and without which her plan would have fallen apart completely, so good thing she had the confidence to believe she'd get that crucial piece of information when she started putting all her pieces into play).

As a spy story Red Sparrow is largely derivative but, then again, most genre movies are. Being formulaic isn't a crime if you manage to do it well, though the film never dazzles within the confines of its genre tropes. What stands out about Red Sparrow instead is its perverse fascination with brutalizing women (mostly Dominika, but other female characters, too) in ways that are largely sexualized, but sometimes merely physical. It's not just the fact that are multiple rape (or near rape) scenes in the story; it's the way those scenes are shot. These scenes will start with an overt, appraising focus on Dominika's body, because apparently it's important to establish that Jennifer Lawrence is hot before proceeding to violate the character. The first ends with the guy having hit throat cut while he's on top of her, his blood spattering over Lawrence's chest in what is, essentially, a "money shot" but one which substitutes blood for semen because that's the only way it could be acceptable in a mainstream movie. Later, in what the film likely considers a moment of empowerment, Dominika strips in front of a room full of people and basically taunts her second rapist into giving it another try, rendering him impotent by refusing to allow him to have any power in the situation. Again, the focus is on Lawrence's body, ogling her even as it tries to play this off as a moment that belongs to her as some sort of triumph.

The problem with Red Sparrow is not that it acknowledges that sometimes people with power will use that power to coerce or force sexual favors from people without power (Dominika is a dancer for the Bolshoi, which has a history of women being pressured and/or forced into sexual relationships with wealth patrons going back to the days of the Tsars). The problem with Red Sparrow is that it can't seem to help itself from reducing its female characters to their body parts. Dominika is raped, almost raped, molested in front of an audience, groped in a social situation, tortured in a sexualized fashion that brings to mind the bondage pornography she was forced to watch as part of her training (when she arrives at the facility it's suggested, by reference to the fact that most of the recruits come from a military background, that there's some athletic component to the training, yet we never see her learning how to fight, only how to desensitize herself to sex), and repeatedly put in situations where a conversation with a man devolves to the point where he says, either directly or euphemistically, that sooner or later she's going to sleep with him whether she likes it or not. Even when she's not being subjected to abuse or harassment she's being spoken to or spoken of in a way that circles everything back to sex. The film rarely goes a single scene without associating Dominika with sex, as if that's all she is and all she's capable of offering.

Even scenes that aren't sexualizing Dominika still manage to foreground the female body in ways that suggest the allure the female form and then shatter it with violence. Dominika's dance at the Bolshoi comes to a sudden end when her partner leaps onto her leg, snapping it and ending her career, and the film lingers on the sight of her leg lying at an impossible angle. Later Dominika will learn that the accident was actually planned by her dancing partner and a rival ballerina and will exact revenge by interrupting them mid-coitus in a steam room at the Bolshoi (why a steam room? Because it's the easiest way to get them a) naked, and b) in a place where Dominika can get to them by doing nothing more than walking through a door) and beating them both with her cane. The visibility in the room is low enough that they don't see her coming, but good enough for the film to make a point of showing you the woman's backside before the beating starts, and then her front side as it's taking place. The film is just so relentless in the way that it fetishizes acts of brutality and degradation on women's bodies that it feels punishing to watch it and begs the question: who the hell was this even made for?
Posted by Norma Desmond at 8:00 AM