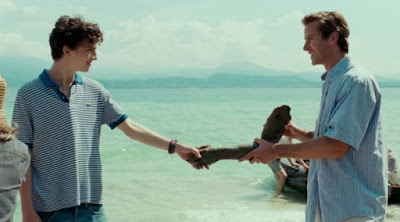 To speak or to die. That's the question at the heart of Call Me By Your Name, Luca Guadagnino's adaptation of the novel of the same name about the intensity of first love, in all its confusion and terror and joy. It's a well-realized film that, despite being told via a deeply restrained and interior story, manages to bring the emotions up to the surface to create something insightful and quite moving. Nominated for 4 Oscars (Best Picture, Best Actor, Best Adapted Screenplay, and Best Original Song), and arguably deserving of more, Call Me By Your Name is one of the best films of 2017. It's a thoughtful and beautifully rendered piece of work, even though it opts to be shy at moments when it might have been better served by boldness.

Set during the summer of 1983 in a town in the Italian countryside, Call Me By Your Name is the story of Elio (Timothee Chalamet), the 17 year old son of an archaeology professor (Michael Stuhlbarg, giving a glorious supporting performance), and Oliver (Armie Hammer), the graduate student who has come to work with Elio's father during the summer and stay at the family's home. From the start there is tension between the two young men, as Elio resents this annual ritual which requires him to give up his bedroom to a grad student for six weeks of the summer, but he also takes issue with Oliver's attitude which, in his confusion over the feelings that Oliver has stirred in him, he interprets as a kind of rejection, an aloofness that indicates that Oliver thinks he's above him. What Elio fails to recognize is that his own behavior can be just as distancing, particularly when he begins trying to push Oliver off on one of his female friends, while he himself begins a relationship with Marzia (Esther Garrel), another friend.

The story of Call Me By Your Name, which has been adapted by James Ivory, is built around a delicate push and pull. Elio and Oliver are drawn together by attraction, but driven away from each other by their discomfort over that same attraction and by the fear that each has that the attraction is unrequited. They dance around each other (figuratively, mostly, but sometimes actually literally) as if they can shake the feeling off if only they keep moving, but finally they begin to speak of what's between them, first in a couched way and then more clearly and directly. Mirroring the pace of the relationship, the film is languid during its first half, the characters frittering their days away by the pool or lying in the grass, but becomes increasingly urgent in the second, as Elio and Oliver finally chose to speak and realize that time is running out and that they'll soon have to go their separate ways.

Capturing a feeling that is balanced between regret (that such things can be fleeting) and gratitude (that such things can exist in the first place), Call Me By Your Name is a delicately told film - perhaps a little too delicate. The film has been criticized by some for its seeming timidity in its portrayal of the relationship between Elio and Oliver and, for a film which features an already notorious scene involving a piece of produce, it is awfully tame, even downright chaste, in its treatment of sexual intimacy between its two main characters. That isn't, in and of itself, necessarily a bad thing (though it speaks to a continuing skittishness with respect to depicting same-sex attraction between men in mainstream movies) but it is curious coming from Guadagnino, a filmmaker who is not generally known for politely training the camera away just as the characters onscreen are about to consummate their attraction. His previous film, A Bigger Splash, is so aggressive in its use of nudity and sexuality that it sometimes feels like a challenge being presented to the audience, so the restraint of how Elio and Oliver are depicted together is a surprise, especially in light of how much more explicit the sexual relationship between Elio and Marzia is. An argument could made that Guadagnino didn't want to see the relationship reduced to nothing more than the sex, but given the profound emotional impact that the physical aspect of the relationship has on the two men, the erasure of that element feels like a political rather than an artistic decision.

Nevertheless, the emotional depths of Call Me By Your Name are enough to ensure that one doesn't leave it feeling short-changed. Chalamet and Hammer do great work in exploring the relationship in all of its emotional complexity, and though the film makes reference to the less open-minded time in which it is set (primarily through Oliver's reference to how his own parents would react to his relationship with Elio), it's ultimately not a story about a same-sex couple fighting against prejudice in order to be together. The people around Elio and Oliver are as sensitive to them as the film itself, passing no judgement on what they can sense is happening and in the case of Elio's father in a beautifully written monologue towards the end, encouraging the relationship and Elio seizing happiness no matter how unexpected the place where he finds it. It's a story about embracing possibility and not shutting yourself out from joy even though it may lead to pain later. It's a lovely coming of age film and, should Guadagnino make good on his suggestion of turning this into a series that follows the characters as they grow older, Elio and Oliver are characters who will be worth revisiting over time.
Posted by Norma Desmond at 11:34 AM