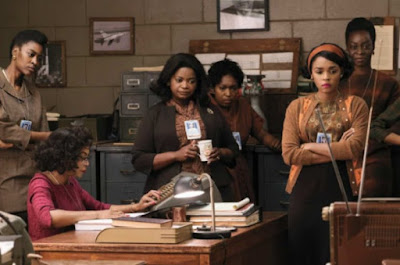 Given the opportunity, people can do extraordinary things. How unfortunate then that opportunities are so limited to the few, rather than open to the many. Hidden Figures, based on the book of the same name by Margot Lee Shetterly, is the story of three women - Katherine G. Johnson, Dorothy Vaughan, and Mary Jackson - who broke barriers of color and gender to help send a man into space and it's as rousing and as crowd pleasing as its box office success would suggest. As biographical/historical movies go, it hits that sweet spot between being important and being highly entertaining, and manages at once to be very direct about its primary theme (racism), while still being subtle in the distinctions it draws between the different forms that racism can take, as well as the different means through which it can be combated. While certainly not the most technically sophisticated movie I saw from 2016, Hidden Figures is nevertheless one for the ages.

Set in 1961, the film introduces Johnson (Taraji P. Henson), Vaughan (Octavia Spencer), and Jackson (Janelle Monae) as "human computers" working in the segregated West Area Computers division at NASA. Although the three women share the same general problems being a minority within a minority in a working environment where they are surrounded by white men (men so homogeneous that they all wear the exact same outfit: short-sleeved white button down shirts with thin black ties), each faces her own specific challenges at work. Jackson has the aptitude and the desire to become an engineer, but in order to meet NASA's educational requirements for the position she would have to take a course at a school that doesn't admit black students; Vaughan has stepped up to take over the work of a supervision who has gone on sick leave, but can't convince management to actually promote her to the title (and salary) of supervisor, their reasoning being that the section is running just fine "without" a supervisor; and Johnson is sent to work with the group doing the calculations needed to send a man into space, but is treated with contempt and disdain by her white colleagues, who are so scandalized when she pours herself a cup of coffee from the shared pot that the next day she comes in and finds a small pot labelled "colored" sitting next to the bigger communal one. Bear in mind, these people were fucking scientists.

In addition to that, whenever Johnson needs to use the washroom she has to travel half a mile to the only building that has a "colored" ladies' room, meaning that much of her day is spent running across parking lots in heels and her frequent absences earn the ire of her group's director, Al Harrison (Kevin Costner). This leads to a confrontation that results in one of the film's most powerful moments (albeit one which leads to a scene that leans a little heavily on the "white savior" trope) as well as offering insight into the complex way that Hidden Figures deals with racism both in terms of how its three main characters suffer from it and how the white supporting characters perpetuate it. Johnson, Vaughan, and Jackson each demonstrate a different means of combating racism, with Jackson being very direct and openly fighting her way through barriers, Vaughan pulling herself ahead by going out of her way to make herself indispensable, and Johnson being possessed of a level of talent so great that it simply cannot be denied. But the film also displays the different ways that racism can manifest itself, from the violently hateful (which occurs mostly on the margins of the film, glimpsed through newscasts and civil rights demonstrations happening in the vicinity of the characters), to less violent but no less hateful (such as the fact of segregation everywhere the women go and the way that Vaughan's supervisor, played by Kirsten Dunst, is so hostile to and dismissive of her), to privileged ignorance. This last is exemplified in Harrison, who never says anything racist and of whom it is never suggested that he has anything against Johnson because of her race, but who fails to see the racism around him because he quite literally has never had to think about it before. It doesn't affect him, so he can go through life without acknowledging it. Once he is forced to think about it he does something to rectify the situation, but that initial quality of ignorance, of not seeing a problem because it doesn't apply to him, is rather telling.

Hidden Figures is very much a film about racism, one which confronts the issue openly and directly, but it manages not to be heavy handed in its treatment of the subject. There are big speeches - the aforementioned confrontation in which Johnson explains her issue to a clueless Harrison, and a scene in which Jackson goes to court to plead her case for being granted a court order to attend school - there are repeated declarations that the things that are unfair are "just the way it is," and there's an exchange which effectively acts as a thesis statement (in which Dunst's character claims to have nothing against black people and Spencer's Vaughan replies, "I know. I know you believe that.") and is arguably the film's best and most affecting exchange, but director Theodore Melfi doesn't push these things too hard. He understands that he doesn't have to put any extra emphasis on them because the actors will be able to make them moments of impact by bringing forth the humanity and dignity of the characters, which needs no embellishment.

The film's acting ensemble, which last weekend took home the Screen Actors Guild prize for Best Ensemble, is wonderful to behold. All three of the actresses at the center of the narrative turn in compelling, complex performances (Spencer is the only one nominated for an Oscar, but Monae, between this film and Moonlight, in which she has a small supporting role, makes a case for herself as a breakout star to watch) and they are surrounded by stellar supporting performances from Costner and Dunst, as well as Mahershala Ali as Johnson's suitor, Jim Parsons as Johnson's closed-minded colleague, and Glen Powell as John Glenn, a guy who understands that the color of the person doing the math isn't what's important, just that the math is right. And in the end, if there's a lesson at the heart of Hidden Figures, it's that discrimination is the act of cutting off your nose to spite your face. When people are excluded from positions of power and influence, when they're excluded even from participation, on the basis of something wholly superficial that has nothing to do with them as individuals, it robs the world of the fruits of their talent and ability. When entire groups of people are limited in what they're allowed to contribute to and achieve in society, the world itself becomes a place of limitations, but when those people are given the freedom to demonstrate their potential, they might just reach the stars and take the rest of us with them.
Posted by Norma Desmond at 8:00 AM