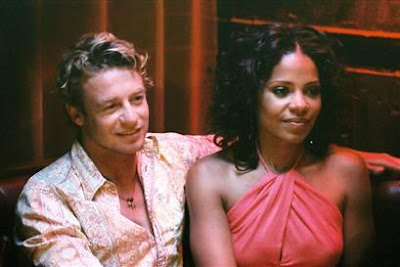 Sanaa Hamri's feature film debut Something New may be a trifle, but it's a delightful one. It plays to the familiar beats of the romantic comedy genre, offering nothing new thematically, but at least providing a fresh perspective on the old tropes. That films of its kind are so rare is a shame.

The story begins with Kenya McQueen (Sanaa Lathan), a successful finance manager whose love life is on life support. With no other prospects on the horizon, Kenya reluctantly agrees to be set up on a blind date, though she's disconcerted when she arrives and learns that Brian (Simon Baker) is white. She isn't interested in a relationship with him but, after running into him again at a party, decides to engage his services as a landscaper to spruce up her yard, which can generously be described as a "work in progress."

It isn't long before Kenya is giving Brian a second look, though her reservations about the relationship remain. Her friends encourage her to have fun with Brian before settling down, while her family subtly expresses disapproval and push her towards Mark (Blair Underwood), an attorney who was the mentor to Kenya's younger brother (Donald Faison). Kenya breaks things off with Brian and gets involved with Mark, who meets pretty much every point on Kenya's checklist, except that she has no passion for him.

Whether or not Kenya and Brian end up together really isn't a question; it never is with this type of movie. What matters is how they get there and whether the film can offer any new insights into the story, which Something New accomplishes. Romantic comedy/dramas very rarely treat black characters as anything other than sidekicks or an element that gives a film a sense of being anchored, in some small way, in the real world, so it's refreshing to see a familiar story told from a different point-of-view. This isn't to say that the film is always necessarily successful in blending its social commentary into the story - the characters, particularly Brian, do sometimes slip into speaking in platitudes - but a few rough edges can be forgiven when a film comes by them honestly enough.

The main draw of a film like Something New is the performance and though Lathan and Baker don't have the greatest romantic chemistry, both turn in good performances. Lathan, in particular, displays a nice combination of edginess and grace that works well for her character. She's more than capable of carrying the film and proves here that she's an actress who ought to have not just more roles, but more prominent ones as well. Hollywood would certainly be the better for it.
Posted by Norma Desmond at 8:00 AM

I really enjoyed this movie. And you're right, it really does draw one's attention to just how scarce these kind of movies are. It's great seeing an actor other than tyler perry stepping up to star in a film; especially one that discards normal stereotypes and promotes positivity.