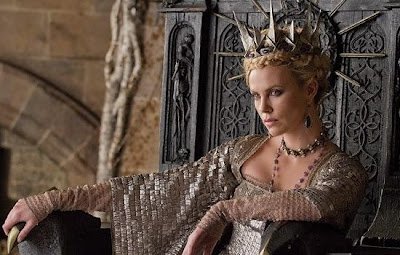 Now that Mirror Mirror and Snow White and the Huntsman have both been released, the question of whether or not the world needed a live-action Snow White can finally be answered with a resounding... maybe. Given that the latter film has grossed in one weekend almost as much as the former in its entire theatrical run, it's at least safe to say that the preference is for a darker, action-oriented take on the story over a broadly comic take. I haven't seen Mirror Mirror so I can't really compare the 2012 takes on the story, but I can say this: if given the choice, go with Disney's animated version.

The story begins in Snow White's childhood, when she's the beloved Princess of a prosperous kingdom. Shortly after the death of her mother, an army seemingly advances on the kingdom, only to be easily defeated and their captive, the beautiful Ravenna (Charlize Theron), is released. The King marries Ravenna the next day and on their wedding night is murdered by her while her own army, led by her brother, Finn (Sam Spruell), take control of the kingdom. Snow White is locked up in a tower and finally escapes years later, now a teenager (played by Kristen Stewart), after Finn is sent to collect her so that Ravenna can devour her heart and thereby ensure her own immortality.

Snow White makes it to the Dark Forest, where most fear to tread, and a huntsman (Chris Hemsworth) who is known to have ventured into the forest is summoned and tasked with finding Snow White and bringing her back. Once he does find her, however, the Huntsman quickly switches his allegiance, helping Snow White evade capture as Finn and his men rampage across the kingdom looking for her. Snow White and the Huntsman eventually team up with seven dwarfs and William (Sam Claflin), the son of a Duke, who was once Snow White's childhood playmate, and look to raise an army to challenge Ravenna and take back the kingdom.

There are many moments when this dark take on the Snow White story works really well, moments that are visually amazing and exciting, but on the whole the film becomes bogged down by its weaknesses. Ravenna is far and away the film's most interesting character and Theron delivers a vibrant, scenery chewing (in a good way - with a story like this there's little point in going "small") performance that consistently perks the story up when it threatens to fall limp. When the story strays from her and focuses instead on Snow White and the Huntsman, as it does for most of the narrative, it suffers as a result. Hemsworth's performance is fine on its own but there's an understated quality to it that just doesn't work against the absolutely lifeless performance rendered by Stewart, resulting in scenes that have no spark and seemingly no purpose.

Stewart is a weak link amongst the actors, however, I'm willing to concede that that might not be entirely her fault because the film is sort of all over the place. There are strange tonal shifts, an undercooked love triangle, and a severe lack of development with respect to the characters. For example, we're continuously told throughout the film that Snow White is inspiring but there's little evidence of why she's inspiring, other than the fact that she's not Ravenna. The character (and others; the problem certainly isn't limited to the protagonist) never gains any dimension, so hanging the story on her means that the story never gains any dimension either and that the set-pieces, no matter how technically well-done they are (and they are very well-done), are kind of pointless because there's nothing to ground them in any kind of meaning.

I've read reviews of this film that call it a feminist take on the story and I have to disagree with that fairly strenuously. It takes more than having a female protagonist who wears pants and behaves in ways that are traditionally viewed as "masculine" to make a film "feminist." The only time the story ever comes close to connecting with feminist issues is through Ravenna's backstory (kidnapped by raiders as a child and then, presumably, passed around as chattel), but the story isn't really all that concerned with why she's chosen to use her powers for evil, instead giving its attention to a cipher whose goodness is ultimately hollow.

Although Snow White and the Huntsman isn't without its strengths, its weaknesses are far too glaring to be ignored.
Posted by Norma Desmond at 8:00 AM

agreed. i thought the film was all over the place, but hemsworth, spruell and theron still managed to looked good.this was way too much on the shoulders of stewart, who was aggressively bland.