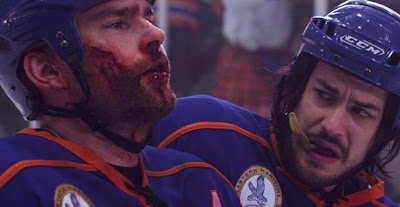 To call Goon a kinder, gentler version of Slap Shot seems odd, given that it centers on a character whose only purpose is to inflict pain on other hockey players, and yet there's really no better way to put it. Despite his rough work, the film's protagonist is actually a pretty sweet guy - even, surprisingly, when he's pummelling the hell out of someone, as he often is. How much you enjoy Goon may depend on how much you like hockey, but personally I think it hits the sweet spot between lightweight comedy and dumb comedy.

Goon follows Doug Glatt (Seann William Scott), a Massachusetts bouncer who doesn't quite fit in with his family, all of whom are super intellectual. When he goes to a hockey game with his best friend (Jay Baruchel), he gets into a fight which so impresses the coach of a minor league team that he's invited to tryout for a spot on the team. Although he can't really play hockey or even skate (and shows up for the tryout with figure skates), his fighting skills are enough to earn him a job as the team's new enforcer and the nickname "The Thug."

After gaining some experience in his hometown, Doug is called up to join the Halifax Highlanders, where his primary job will be acting as a sort of bodyguard for former star player Xavier Laflamme (Marc-Andre Grondin), who has been sent back down to the minors after flaming out in the NHL following a concussion which has left him deathly afraid of being hit. As Doug's popularity grows, Xavier begins to focus his considerable animosity towards him, jealous that someone who can't even play the game has earned so much notoriety with the fans and with their coach. It's only when it becomes clear that Doug is going to face off with legendary enforcer Ross Rhea (Liev Schreiber) - who also happens to be the player who gave Laflamme the concussion - that Laflamme begins to let go of his anger and begins to see Doug as a friend and teammate - and, of course, this happens just in time for the game that will determine whether or not they make it to the playoffs.

There are a number of reasons why Goon shouldn't (and, for some, perhaps won't) work. There are plot threads that get set up only to never resolve - for example, Doug's issues with his family, particularly his parents' disapproval with his newfound career - and a romantic subplot involving Eva (Alison Pill), a hockey fan who has a boyfriend but just can't resist Doug because she loves watching him beat the hell out of people, is objectively a little underdeveloped, as is the rivalry between Doug and Rhea. Those structural issues, however, do little to detract from how enjoyable the film is, which I think is largely due to Scott's performance. Doug is the ultimate straight man, an achingly sincere character who can draw blood while seeming truly apologetic about the necessity of it. I've never thought too much of Scott as an actor, but he's really good here, showing more nuance in this one performance than he probably has in all his others combined.

Also noteworthy is Baruchel, a Canadian film mainstay and Judd Apatow regular who, in addition to playing the over-the-top sidekick (who just skirts the edge of being too obnoxious to forgive), also co-wrote the film with Evan Goldberg (writer of Superbad, Pineapple Express and The Green Hornet). The screenplay, despite some of the issues above, finds a nice balance between comedy and sports tropes, and keeps things floating along smoothly with its low stakes, light hearted nature. Goon may not be a great film, but it's a fun and, ultimately, a successful one.
Posted by Norma Desmond at 8:00 AM