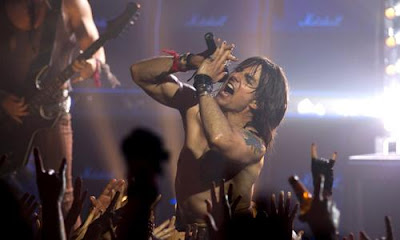 Like Mama Mia before it, Rock of Ages is a big, cheesy spectacle that aims to do little more than entertain. The plot is so simple that to call it "by the numbers" would be giving it to much credit and, besides, the plot takes a distant third in terms of importance, ranking well behind the music and the look. Considered objectively, Rock of Ages really isn't a very good film - but it is fun. To be honest, the scene where Alec Baldwin and Russell Brand duet "Can't Fight This Feeling" alone makes it worth the price of admission.

The main players in Rock of Ages are Sherri (Julianne Hough), literally just off the bus and determined to make it in the big, glamorous city, and Drew (Diego Boneta), a barback at The Bourbon Room who longs to be a rock star. The two meet when Sherri's suitecase - filled with her record collection - is stolen, after which Drew gets her a job waitressing at the Bourbon and the two promptly fall in love. While their evolving feelings are expressed through various pop hits from the 80s, events at the club set the stage for the inevitable romantic conflict. The Bourbon Room is owned by Dennis Dupre (Alec Baldwin), who once gave superstar Stacee Jaxx (Tom Cruise) his big break, but is now on the brink of financial ruin. He's made a deal for Jaxx to perform his last show with his band, Arsenal, at the Bourbon but the success of the venture depends entirely on whether or not Jaxx, so lost in his own mystique and vices, actually shows up.

Jaxx does show up, but is rattled by an interview with a Rolling Stone reporter (Malin Ackerman, who's character name I'm not going to repeat because it's stupid), and the opening act drops out hours before the show, which gives Drew an opportunity for his big break after Sherri talks Dennis into letting him go on. Drew is a hit and is offered a record deal, and Arsenal goes out in a blaze of glory, resulting in a big haul at the end of the night. What should be a great night, however, is marred for Drew and Sherri by a misunderstanding that leads to their breakup and to Sherri quitting her job, and for Dennis when he realizes that the deal he cut with Jaxx's manager (Paul Giamatti, in a fantastically oily performance) will mean that he sees absolutely no profit from the show (in fact, he ends up owing Jaxx $6). While Drew quickly becomes disillusioned with the music industry, which forces him to forgo his rock roots in favour of something more marketable, Sherri hits rock bottom, ending up in the Venus Club, a strip club run by Justice Charlier (Mary J. Blige), and Dennis' problems continue to mount as the mayor's wife, Patricia (Catherine Zeta-Jones), has made it her mission to clean up the Sunset Strip by closing down the clubs. The only thing that might save the Bourbon is for Jaxx to return for another gig, one which would solve the club's money problems and shut down the protesters forever.

That the plot is so perfunctory is fortunate, as the story focuses almost entirely on Sherri and Drew. While Hough and Boneta are both decent singers, neither is a particularly strong or charismatic actor and between their bland on-screen presences and some absolutely atrocious dialogue, many of their scenes fall flat. Where Rock of Ages gets its vitality is in the supporting performances, as Zeta-Jones, Baldwin, Giamatti and, especially, Cruise bring some much needed life to the narrative and manage to keep it going in between power ballads. Jaxx, an over-the-top eccentric with echoes of Axel Rose, is essentially a slightly more broad and sleezy version of Cruise's character from Magnolia, but Cruise manages to deliver a performance that makes it feel like he's doing more than just revisiting an old hit. His star may have dimmed over the last decade, but when you watch him on screen, you're still undeniably watching a star and because your interest as a viewer naturally strays away from Sherri and Drew and towards Jaxx, Cruise ends up doing most of the heavy lifting for the film.

It can't be denied that Rock of Ages has a lot of problems from a structural point-of-view, from the cliche ridden simplicity of the plot, to the paper thinness and confusing motivations of the characters (seriously, I have no idea what to make of Blige's character, because every scene her purpose seems to shift from one extreme to the other), but in spite of all that, it's still an enjoyable film. Admittedly, how much you enjoy it will depend on how much you like the music and/or 80s nostalgia generally, but if you go into it wanting nothing more than simple entertainment, I think you'll be satisfied by Rock of Ages.
Posted by Norma Desmond at 8:00 AM

i enjoyed it, and i thought it played to the cheesiness of the 80s quite well.

Yeah, it definitely embraces its own inherent cheesiness, which is a large part of why I think it works - it's in on the joke.