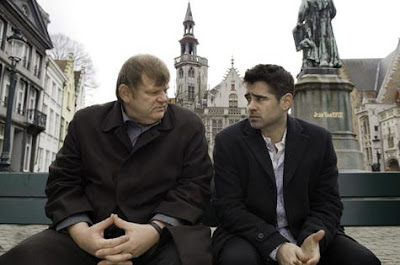 I've never really been a fan of Colin Farrell, but if he made more movies like In Bruges, I could easily become one. People have been recommending this movie to me for two years now and I'm so glad that I finally got around to seeing it. With a great script and great performances all around, In Bruges is the kind of film you can watch again and again.

The story focuses on Ray (Farrell) and Ken (Brendan Gleeson), two hit men who've been sent to Bruges to lay low for an indefinite period of time. For Ray this is just about the worst thing that can happen (just about - the worst worst thing has already happened) and he develops an instant hatred for the city. He's unimpressed by the scenery, he's bored, and he's just generally anxious to get back to Dublin. Ken, on the other hand, makes the best of things and devotes himself to experiencing the city, seeing the sights and trying to get Ray to enjoy it as well. Centuries old buildings don't really do it for Ray, though, and the only thing that sparks his interest is a film being made in town. To quote him directly: "They're filming midgets!"

Soon enough Ray meets a girl who helps him occupy his time while Ken learns the real reason that they've been sent to Bruges by their boss, Harry (Ralph Fiennes). Harry orders Ken to kill Ray and though Ken has taken a liking to his young protege, he owes a great debt to Harry and is inclined to be loyal. When it comes down to doing the deed, however, he wavers and the film takes a few twists and turns before coming down to a shoot out between Harry and Ray.

Although the characters of In Bruges are really not nice people, it's one of the film's many strengths that you can still feel affection for them. Ray has done some very bad things but he's so tormented by them that he's drowning in his own guilt. Even if he "gets away with it," you know that he'll never really be away from it because for the rest of his life it'll be an albatross around his neck. In his performance Farrell expresses this inner turmoil by infusing Ray with a high energy that sees him constantly moving about, as if he might be able to outrun the past if only he can move fast enough. The times when the character is allowed to slow down, the real weight of his crime seems to press down on his shoulders and you believe that his remorse is genuine. Gleeson matches Farrell note for note and the two make for an excellent odd couple-like team.

Written and directed by Martin McDonagh (who earned an Oscar nomination for Best Original Screenplay), In Bruges finds a good balance between drama and comedy. McDonagh has that Tarantino-esque ability to make two characters talking about random things just as compelling as sudden eruptions of violence, making the dialogue just as memorable as the action sequences. It excels as both a dark comedy and a thriller and despite Ray's consistent dislike of the city, it really makes me want to visit Bruges.

i really enjoyed this film, surprisingly. the best i've ever seen from farrell.

True dark comedy at its finest. Hilarious dialogue, and most importantly even better performances.

It's worth checking out Ondine, in which Farrell gives a really terrific performance. He's very soulful and touching but also funny, and the film is Jordan's best work in years too. I'm a big Farrell fan in general, particularly as he was in two of my favourite films of the decade - Miami Vice and The New World - although those two tend to divide opinion pretty sharply. I still think he's got some great roles ahead of him.

@Candice Frederick: Very true about Farrell. Maybe he should do more comedy?

@CMrok93: It really is amazing how well it balances quite graphic violence with really sharp, funny dialogue.

@Philip Concannon: I've heard of Ondine and it's certainly on my list of films to check out.

I put this off for a while too; Farrell kinda bugs me. Here he totally redeemed himself. The interaction b/w he and Gleeson was so compelling.

My favorite line/scene, "Oh, a bottle!"