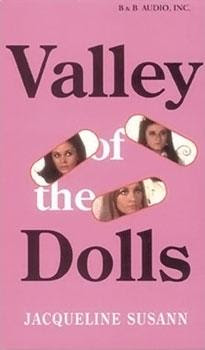 I've come to the conclusion that the biopic is the most difficult of all film genres. I've made this lament before but it really is hard to find a genuinely good one, one that gets the facts right, captures the spirit of its subject, and doesn't get buried in gossipy details of the subject's sex life. Scandalous Me, which takes Jacqueline Susann as its subject, is a film that is far from perfect but it succeeds where a lot of other biopics fail.

Michele Lee stars as Susann and serves as narrator, giving the film an intimate, conversational feel. This plays a pretty big part in the film's success just as the tone of Susann's novel Valley of the Dolls - which a character in the film describes as like gossiping with friends over lunch - helped launch it into the stratosphere. Starting at the end, with Susann dying of cancer, the film then flashes back to the experiences that have brought her to this point. The film then zips through her childhood, lingering just long enough to establish her worship of her father, who encourages her to pursue greatness in the arts, and her more difficult relationship with her mother.

The primary focus of the film is on Susann's tenacious rise to the top with the help of her husband, Irving Mansfield (Peter Riegert). Though it touches on some of the more salacious details of Susann's life - her infidelities, her bisexuality, and her more than passing acquaintance with those "dolls" that helped make her famous - and the tragic circumstances of her son, Guy, it doesn't let them overwhelm the narrative. It never loses sight of Susann as a personality and its construction and campy tone is built to compliment the character.

The film is particularly strong as it explores Susann's drive to be taken seriously in the literary world. Valley of the Dolls is pretty much immediately dismissed as "trashy" by publishers, critics and other writers and Susann is written off as a writer who doesn't have to be taken seriously in spite of her massive popular success. What the film points out (and manages to do so in a fairly subtle way rather than hitting the viewer over the head with it) is that the people writting her off tend to be male and the people embracing her tend to be female. Could the problem, perhaps, be that since her work is geared to women, men have no point of identification and not recognizing themselves reflected in the work lose interest and reject it? I'm not arguing that Valley of the Dolls is great art but considering the way that so many female writers today find their work dismissed as "chick lit," while works by men for men are simply considered "literature," I think it's safe to say that there's at least a bit of sexism involved. I mean, the basic message is that things that are interesting primarily to men are universal while things that are interesting primarily to women are somehow niche. Susann, however, gets the last laugh, breaking sales records and altering the publishing landscape.

As Susann, Lee gives a solid performance that finds the right balance between the heavier and lighter moments of the story. She portrays Susann as a force of nature, a woman desperate for the love and approval of those closest to her (especially her father), and determined to gain the love and approval of the public. The woman presented to us is flawed (in some ways deeply) but ultimately quite likeable and I think that's a good way to describe the film itself. It certainly has its shortcomings, but in the end it's entertaining enough to make up for them.

i've been wanting to see thsi movie for a while. and after yreading your review, i definitely should.

Why is a review of Theodore Rex showing up from you in Google Reader, but not on your site?!!? I need to discuss...

@ Blake: hmmm, it's showing up for me. Here's the link if you want to check it out: http://flickchickcanada.blogspot.com/2010/06/maythew-bonus-theodore-rex-1995.html