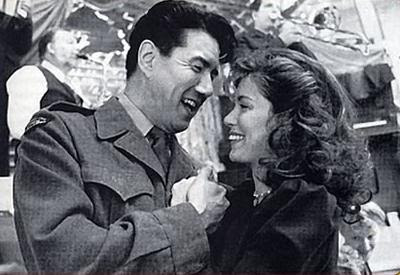 One of the advantages that books have over films is that it's easier to explore a story that spans decades in book form. People kind of expect books to be long (and tend to read them in bits and pieces rather than straight through in one shot) but prefer films to hover around that standard 2 hour threshold. The Diviners takes place over the course of several decades in the life of its protagonist and in their desire to compress the story to make it film friendly, the makers seem to have squeezed out all the elements that might give it weight.

The film focuses on Morag Gunn (Sonja Smits), a well-known writer who, in the story's present day, is experiencing trouble with her teenage daughter. As the situation with the daughter, who keeps running away, escaltes, Morag finds herself looking back on her life and tracing the line that has brought her to this point. Much of the film is told in flashback, giving us vignettes of Morag's life from her own childhood to that of her daughter. Many of the flashbacks deal with Morag's complicated relationship with her daughter's father, Jules (Tom Jackson), and the ultimate impossibility of their relationship.

Morag and Jules have known each other since they were children. As adults they start an on-again, off-again relationship that only seems to function for short spans of time before they have to be apart again. One reason that they are constantly parting is Jules' occupation - he's a musician who travels around the country to make his living and never stays in one place too long - but the main reason is more insurmountable. Morag is of Scottish descent whie Jules is Metis, and it creates a gulf between them based on Jules' experiences of intense racism. Morag will never fully understand what it's like for him, a sentiment which is later echoed in Morag's arguments with their daughter who, Jules points out, looks a lot more like him than her.

The scenes between Jules and Morag, where the issue of race is always the third character in the scene, are great both because of Jackson and Smits and because there's actual substance to them. Where the film suffers is in its constantly shifting timeline, which jumps around so fast that characters and their relationships hardly have time to develop. It's been streamlined almost into meaninglessness and we don't really get to know the characters well enough for the film to have any kind of emotional anchor. The adaptation would perhaps have been better served as a miniseries.

On a more positive note, I think that despite the problems with the film's construction, the character of Morag emerges as very strong and vital. I've never read the source novel by Margaret Laurence, but seeing the film makes me want to. She's a fascinating character, an iconoclast who challenges the mores and feminine ideals of her time. She's a character I would like to see in a more comprehensive and better focused film.

I am looking for movie The Diviners(1993). Can anyone help me to get this. Please send me link to buy it online at amitgaurav49@gmail.com