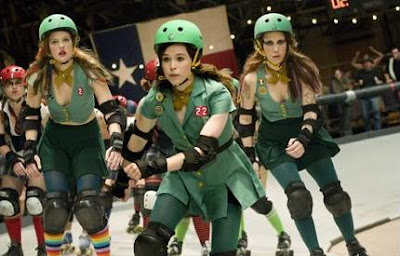 
… Whip it good! Pardon me, that should be Whip It is good. The directorial debut from Drew Barrymoore is a colorful and vastly enjoyable piece of Hollywood candy about a girl, her skates, and her intense desire not to get knocked on her ass. The film may not aspire to much more than entertaining its audience, but it succeeds at doing so with ease and provides a platform for some very funny ladies – Ellen Page, Barrymoore herself, Kristen Wiig, and Maeby Funke! I mean, Alia Shawcat – to show that comedy isn’t just for boys.

In a small Texas town just outside of Austin, misfit teenager Bliss Cavendar (Page) participates in beauty pageants at the insistence of her mother (Marcia Gay Harden), waitresses at the Oink Joint, and waits for something good to happen. That good thing comes in the form of a roller derby flyer that inspires her to sneak off to Austin with her best friend Pash (Shawcat), and then to try out for the derby herself. She digs out her old Barbie roller skates (suspend disbelief enough not to ask how it is that her Barbie skates still fit) and makes the cut, earning a place on the Hurl Scouts team captained by Maggie Mayhem (Wiig). The rest of the team is made up on Smashley Simpson (Barrymoore), Rosa Sparks (Eve), Bloody Holly (Zoe Bell) and the Manson Sisters (Eli Bleiler and Kristen Adolfi).

Bliss renames herself Babe Ruthless and proves to be an asset in terms of speed, though she’s lacking when it comes to aggression. The Hurl Scouts are the fifth ranked team in a five team league and have never won a single match until Bliss comes on the scene and as such her skill does not go unnoticed, particularly by Iron Maven (Juliette Lewis), the captain of the champion Holy Roller team. Bliss becomes Iron Maven’s mortal enemy and all the usual sports rivalry clichés ensue, wrapping themselves around the film and the characters like a comfortable old sweater. As a director Barrymoore doesn’t break any new ground but I think her talent can be measured by the fact that she guides the film so effortlessly through the hoops of time-worn plot points. Yes, we can see certain developments coming from miles away but the film never feels clunky and it has great energy even though the action scenes could use a bit more finesse.

I’ve seen the word “empowering” applied to this movie from certain corners and to a degree I suppose that that’s true, not because it’s about Women! Kicking! Ass! but because it’s about different kinds of female experience and identity. Bliss decries her mother’s view of the world as a stale remnant of 1950s gender norms, but her mother isn’t really the “villain” of the piece and the value that she places on things like beauty pageants isn’t really seen as wrong so much as just wrong for Bliss. Bliss’ younger sister, meanwhile, seems to love participating in pageants and at no point does their mother resemble one of those crazy, reality TV “pageant mothers;” she gets to be an actual human being with depth – amazing! At the other end of the spectrum, you’ve got the roller girl ethos which combines a hyper femininity (lots of makeup, revealing clothes, monikers like “Jabba the Slut”) with what is traditionally thought of as a very masculine kind of athleticism. The film doesn’t argue that either vision of womanhood is universally right or wrong, but that one can be right for some women, the other can be right for others, while some women – like Pash - might choose neither. The film is pro-woman not because it rejects traditional ideas but because it encourages and embraces a variety of experiences and ideas about women.

Once again Page demonstrates that she’s an actress to take note of, playing a character that you might not expect to have as much dimension as she does. I’m very curious to see the way that her career shapes itself once she’s able to move from playing teenagers to playing adults. It’s funny that when the film has Bliss lie about her age so that she can play in the derby, she says that she’s 22, which we’re supposed to think is unbelievable when in reality that is Page’s actual age. At any rate, given that she seems equally at ease in films like this and Juno as well as harder edged films like Hard Candy and The Tracy Fragments, I think it's safe to say that we can expect great things from her in the years to come.

I got to see this on a sneak preview and I was so glad I did. Sadly, I think it is going to end up being a sleeper hit, if anything. The previews don't do it justice and everyone I talk to about it is put off by the roller derby aspect.

@cinecritiqueamericain: I think this will end up being a movie that finds its audience once it comes out on DVD. At least I hope so since it's really quite fun.

@Vanessa: I'm very curious to see where Drew goes next in terms of directing. She's a little rough around the edges, but she's definitely got potential.

I wish i got more than I recieved. It looked so fun, and cool in its trailers, but the film was pretty slow, and dull. Nice Review, check out mine when you can!