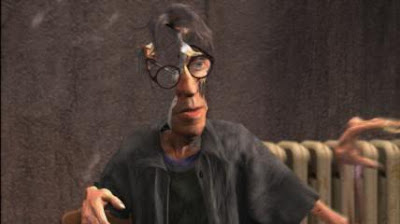 Two documentaries, one life. Ryan and Alter Egos both recount the story of Ryan Larkin, a respected and influential animator in the '60s and '70s who, by the time of his death in 2007 had lost everything. His story isn't really unusual - the genius artist who falls victim to the perils of fame and success - but these two films provide a fresh take on an old story.

Ryan is an animated documentary about Ryan Larkin, an Oscar nominated animator fallen on hard times due to drug use and alcoholism. The story of the film consists primarily of an interview of Larkin by the film’s director Chris Landreth, as well as brief appearances by Larkin’s former girlfriend Felicity Fanjoy, and Larkin’s former boss Derek Lamb. In just 13 minutes the film is able to effectively chart larkin’s rise to stardom and sharp fall as well as reveal the roots of Landreth’s interest in his plight.

Alter Egos is a live action documentary about the making of Ryan directed by Laurence Green. This film gets slightly more in depth regarding Larkin’s history and his relationship with Landreth and gives a behind the scenes look at the making of Ryan. It uses some of the same interview footage with Fanjoy and Lamb (though of course in Ryan these segments are animated), but uses interview footage of others as well in order to give us a picture of the importance of Larkin’s work in the world of animation.

Seeing the two films together is an interesting experience for a variety of reasons. For one thing, it demonstrates that while short films don’t meditate on a subject as long as feature length films, they don’t necessarily lose narrative power for being so succinct. Ryan is successful at conveying the major points of Larkin’s story, so successful in fact that most of the short’s 13 minutes get played out in Alter Egos. Landreth’s film is only a quarter the length of Green’s, but the longer film basically contains the shorter one within it, which I think shows how effectively Landreth was able to get at what is vital about Larkin’s life.

On the other hand, what Landreth leaves out is quite telling. Both films use the same interview clip of Fanjoy in which she lists the issues which may have made Larkin psychologically predisposed to drug and alcohol addiction: the abusiveness of his father, his homosexuality, and the death of his brother. In Ryan the audio is edited to omit the reference to Larkin’s sexuality, which certainly raises a few questions. It is clear from watching Alter Egos that Larkin’s sexuality and, specifically, his relationship with his mentor Norman McLaren, was an important factor in his identity as an artist. Larkin states in the film that he gave up sex sometime in his thirties but, still, just because you give up something physically doesn’t mean that the issues surrounding it cease to have an effect on you mentally. I wouldn’t want to speculate as to why Landreth left the issue out, but I do find this exclusion interesting.

Visually, Ryan is a stunning film in which the characters’ appearances are expressions of their states of mind. Larkin is shown as a fragmented person who at one point literally flies apart and other characters, including Landreth himself, are shown in various states of physical distress. It's really no wonder that Ryan won an Oscar for Best Animated Short because the look of the film is exquisite. Alter Egos is a more standard issue film, a documentary that dutifully interviews and records events but doesn't break any ground from a stylistic standpoint. It's an interesting film to view alongside Ryan, but Landreth's film - despite the issues I've already mentioned - is the superior work.